Bill Cosby guilty on all charges in sexual assault retrial. John Rawlins reports during Action News at 6pm on April 26, 2018.

NORRISTOWN, Pa. -- Bill Cosby was convicted Thursday of drugging and molesting a woman in the first big celebrity trial of the #MeToo era, completing the spectacular late-life downfall of a comedian who broke racial barriers in Hollywood on his way to TV superstardom as America's Dad.

Cosby, 80, could end up spending his final years in prison after a jury concluded he sexually violated Temple University employee Andrea Constand at his suburban Philadelphia mansion in 2004. He claimed the encounter was consensual.

Cosby stared straight ahead as the verdict was read but moments later lashed out loudly at District Attorney Kevin Steele after the prosecutor demanded the former TV star be sent immediately to jail. Steele told the judge Cosby has a plane and might flee.

The judge decided Cosby can remain free on $1 million bail while he awaits sentencing but restricted him to Montgomery County, where his home is. No sentencing date was set.

Cosby waved to the crowd outside the courthouse, got into an SUV and left without saying anything. His lawyer Tom Mesereau declared "the fight is not over" and said he will appeal. 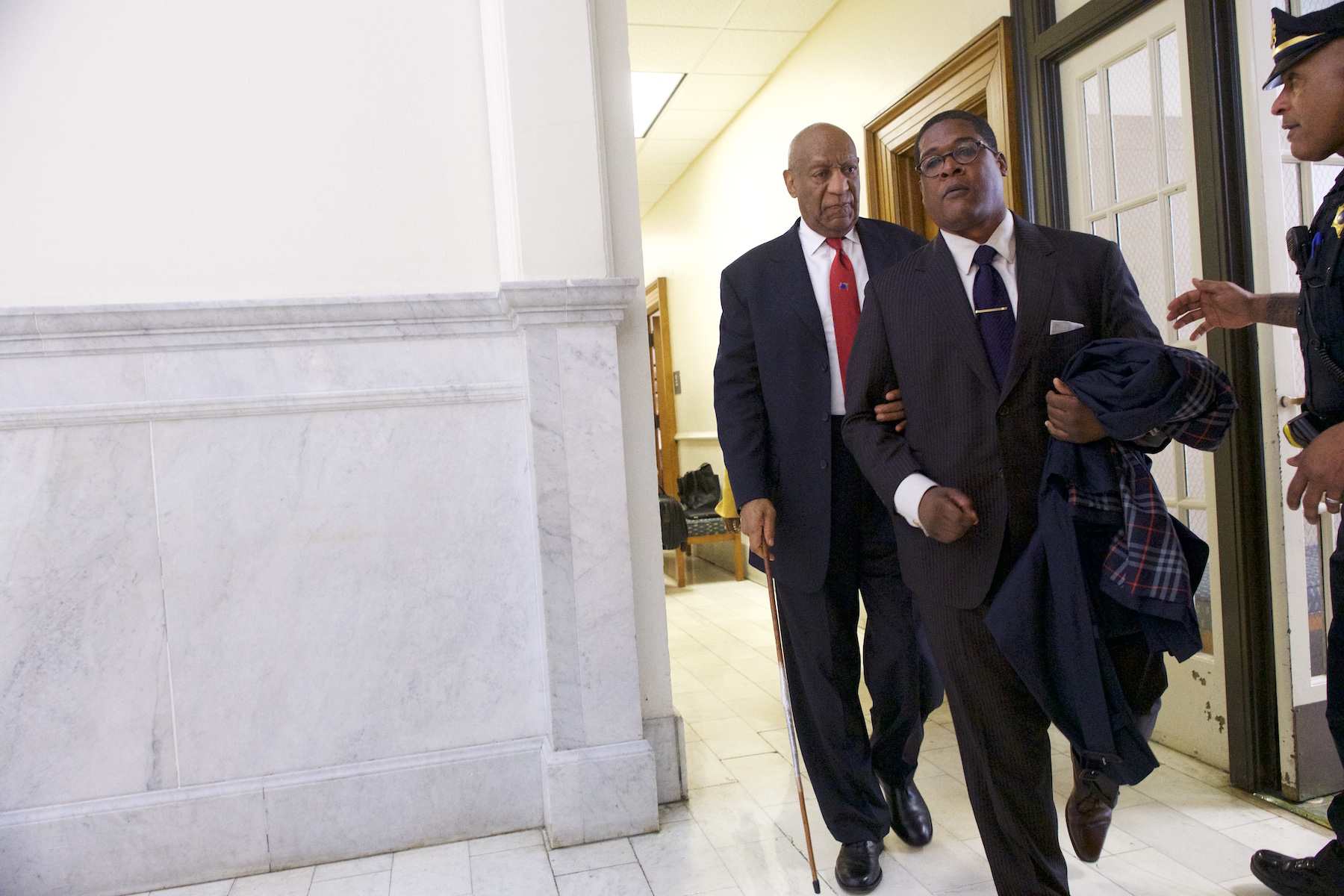 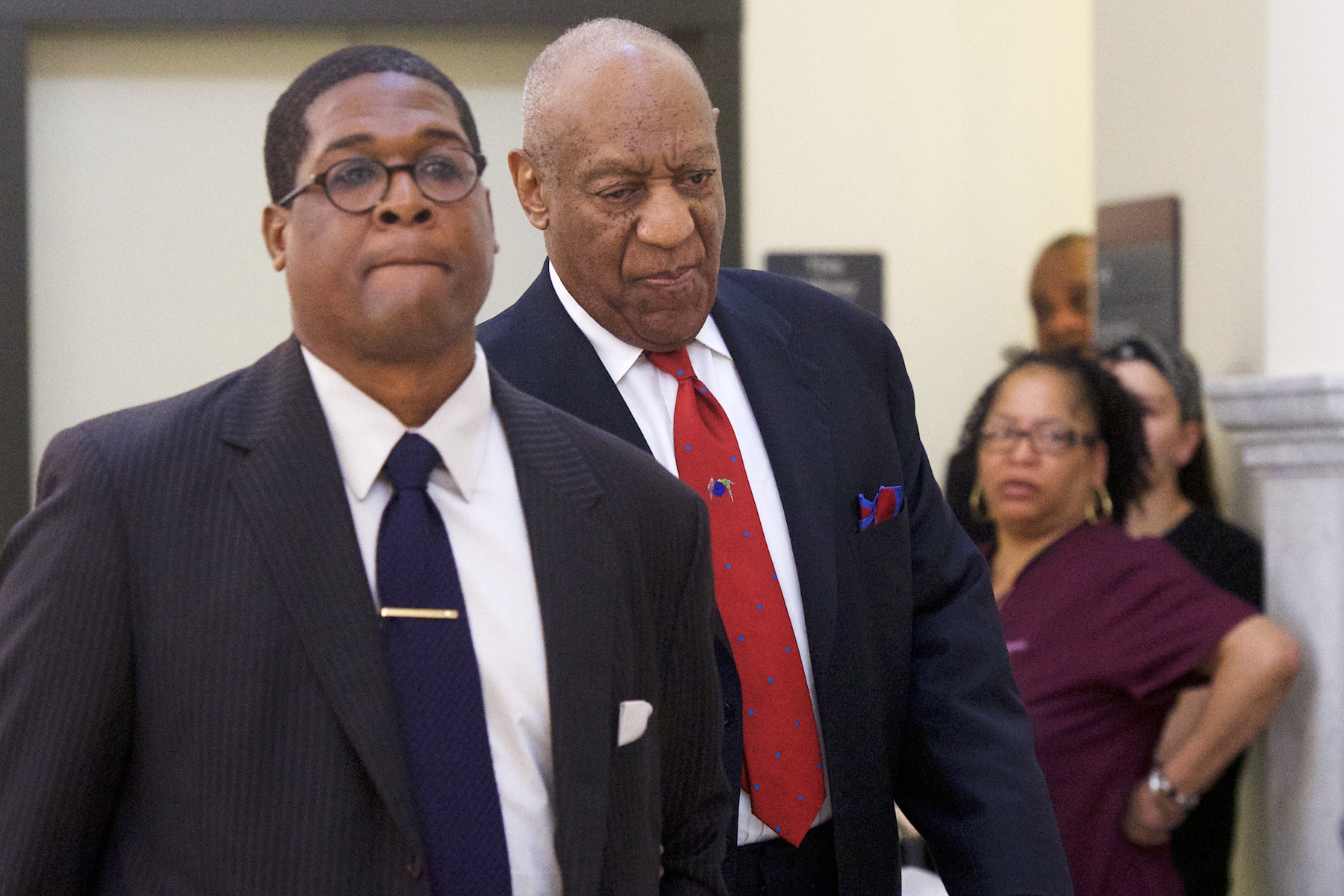 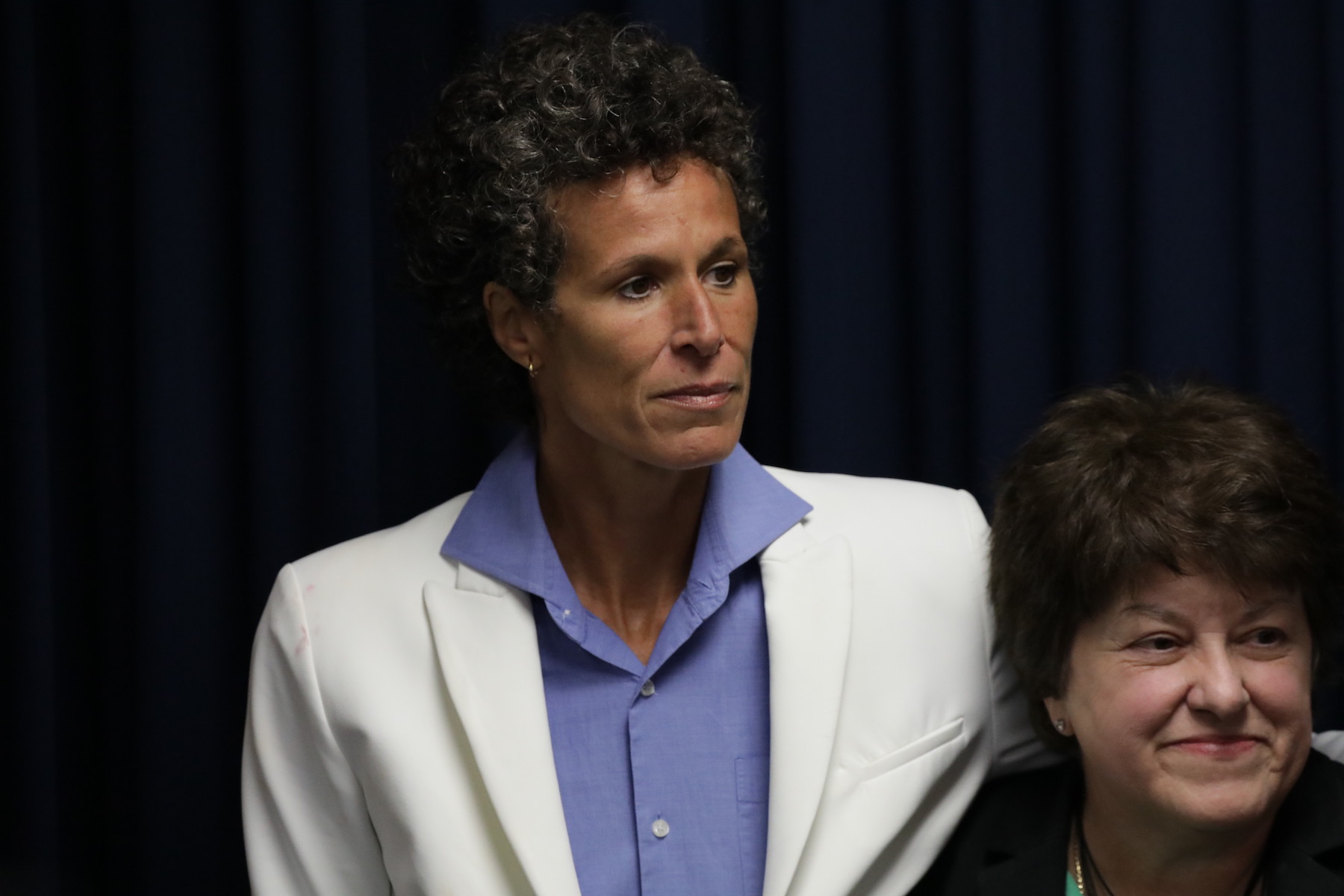 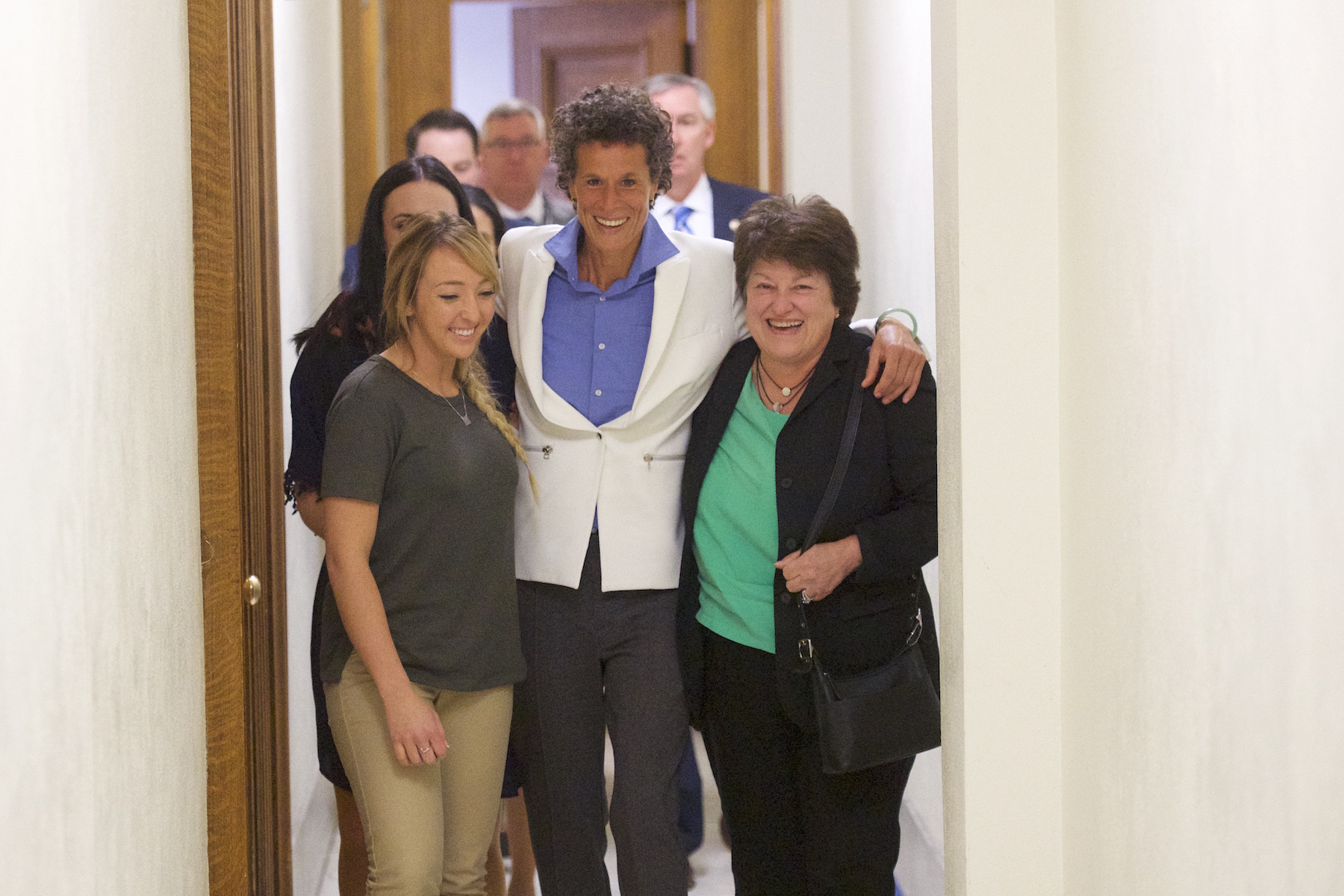 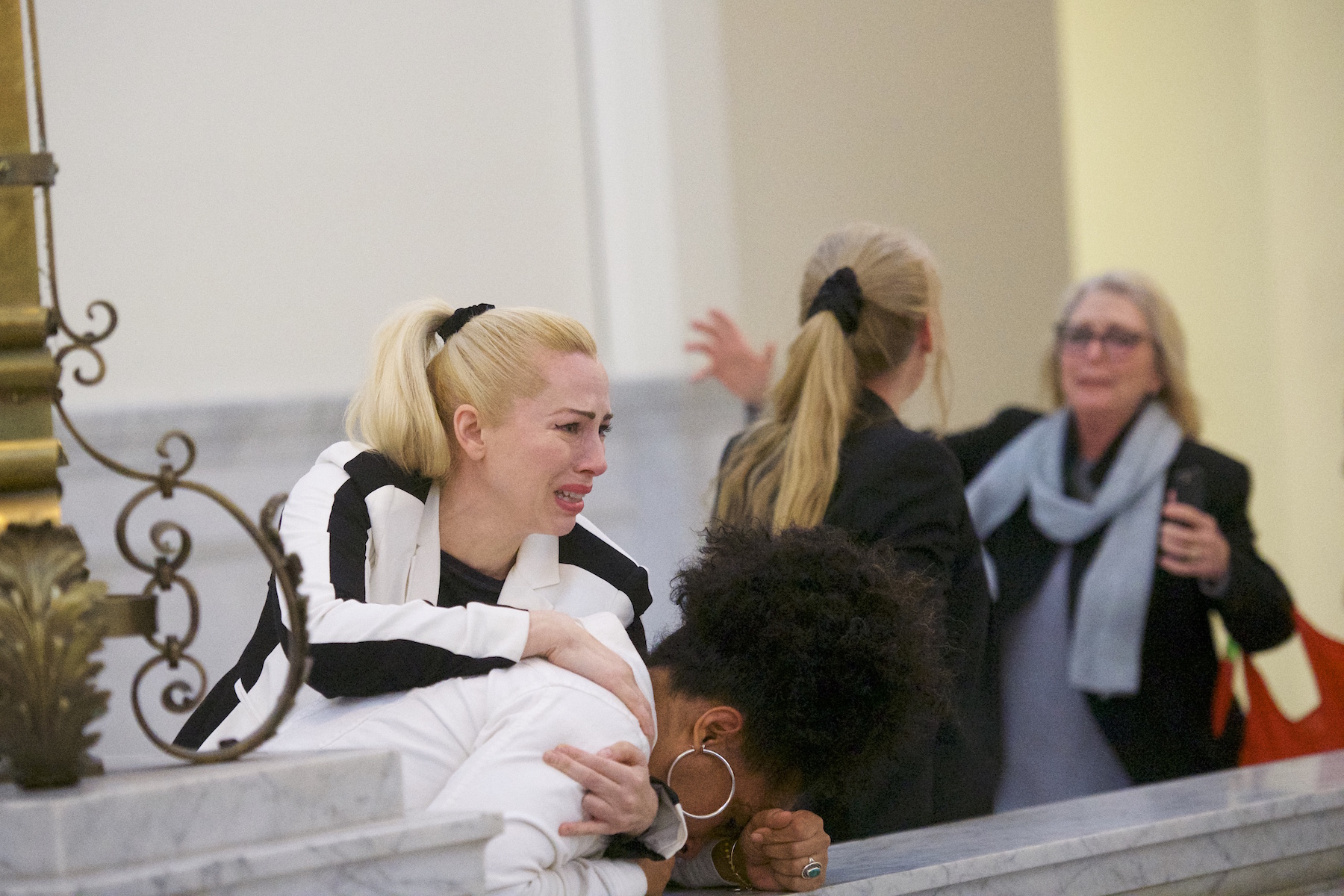 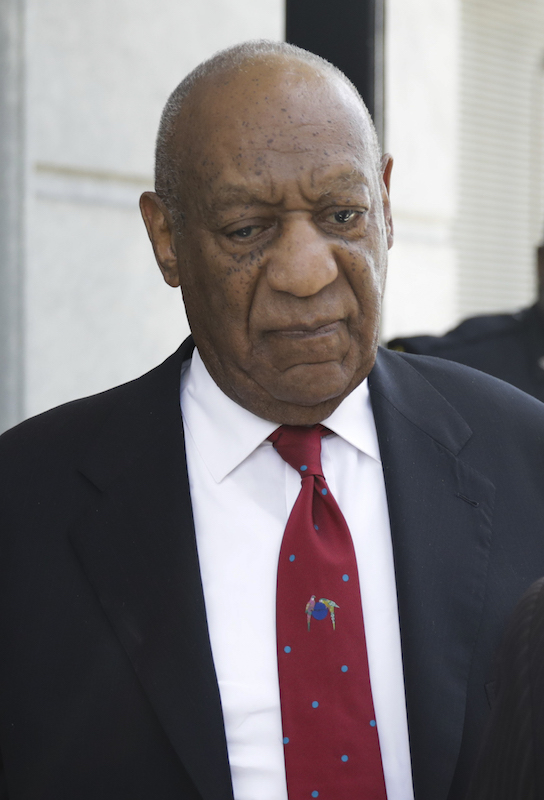 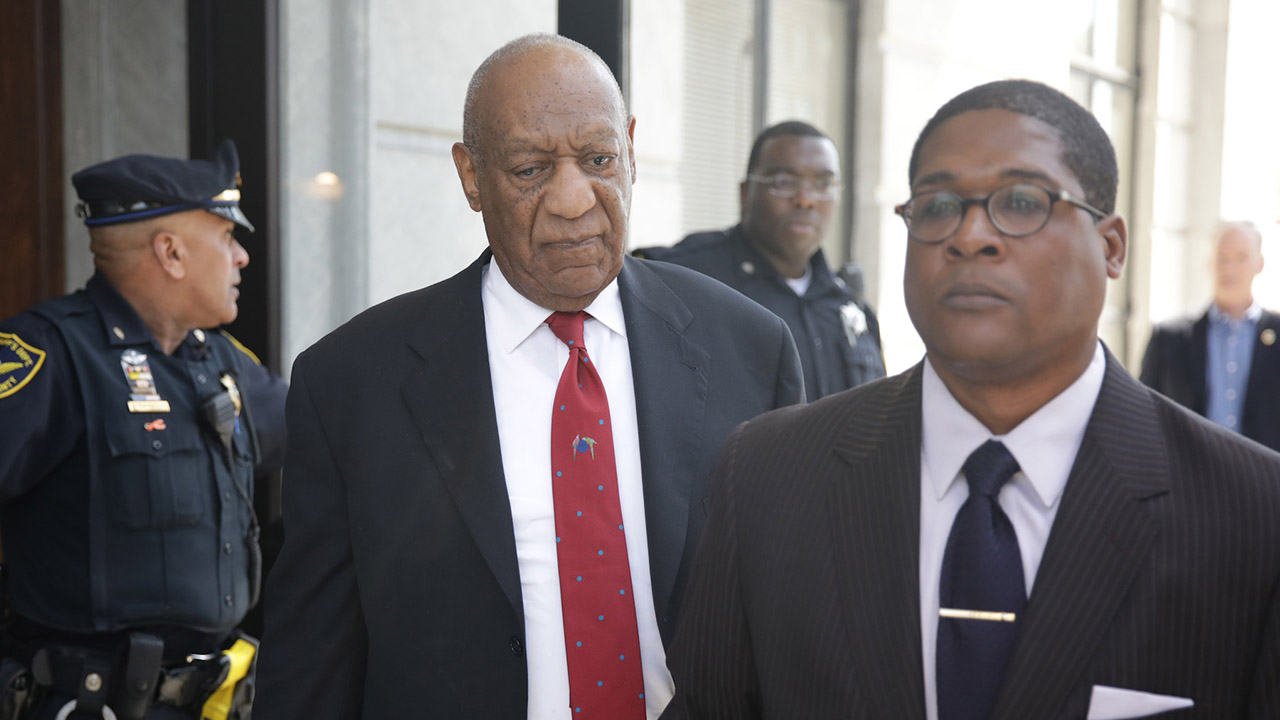 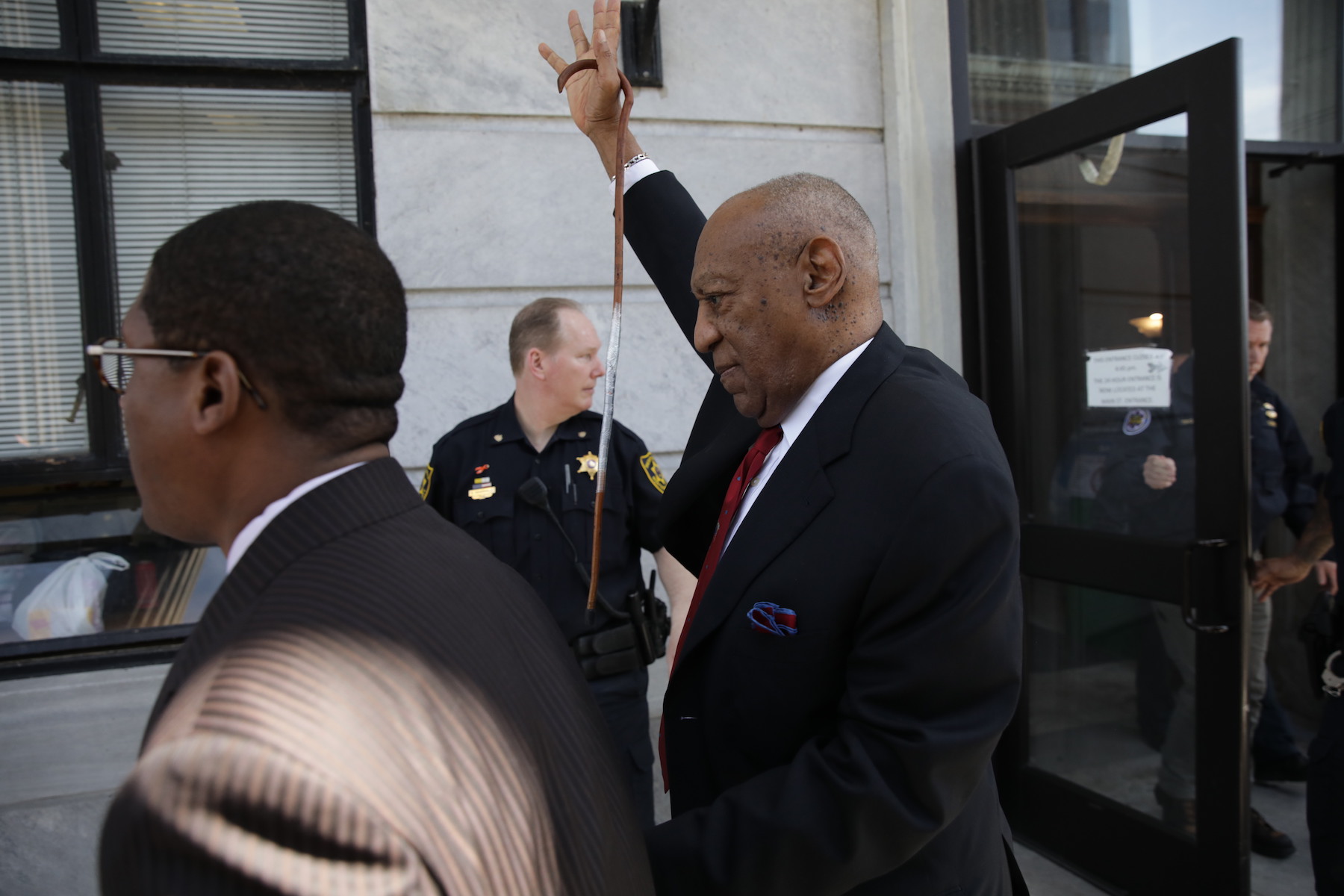 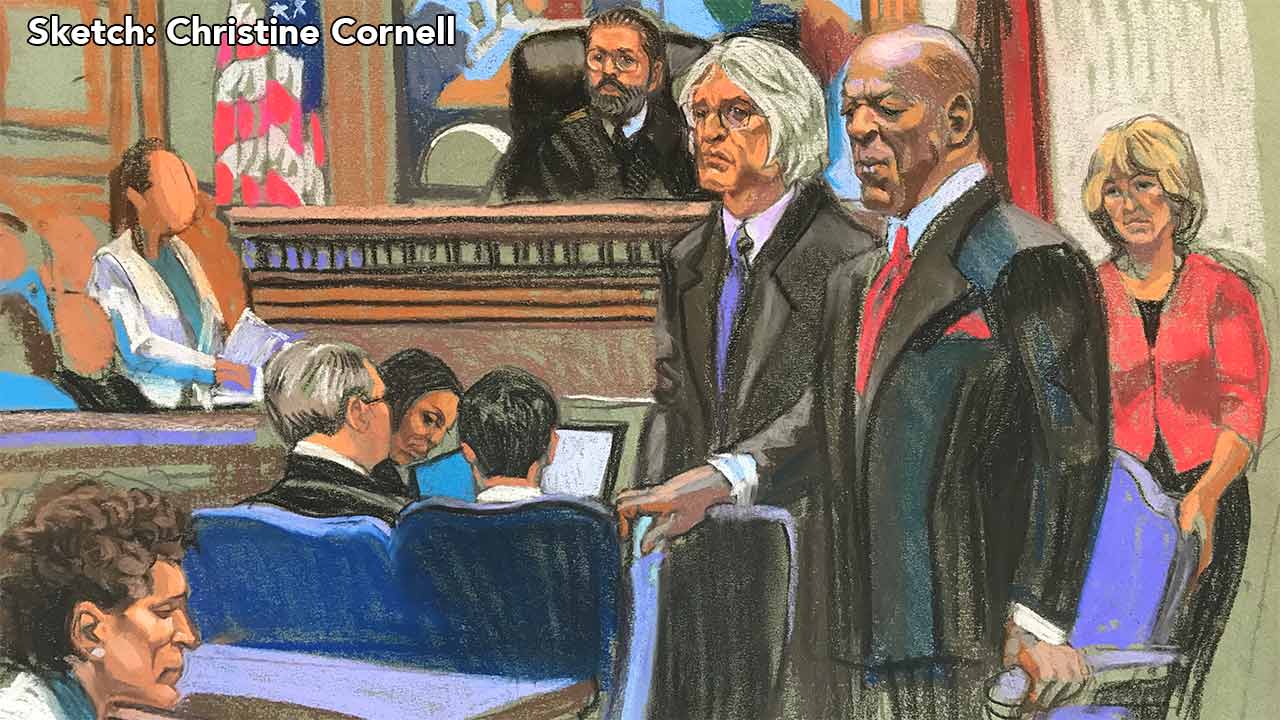 1 of 9
Bill Cosby departs the Montgomery County Courthouse with his publicist, Andrew Wyatt, after being found guilty on all counts in his sexual assault retrial.
Dominick Reuter/AFP/Getty Images

Shrieks erupted in the courtroom when the verdict was announced, and some of his accusers whimpered and cried. Constand remained stoic, then hugged her lawyer and members of the prosecution team. She left court without comment.

"Justice has been done!" celebrity attorney Gloria Allred, who represented some of Cosby's accusers, said on the courthouse steps. "We are so happy that finally we can say women are believed."

The jury of seven men and five women reached a verdict after deliberating 14 hours over two days.

The verdict came after a two-week retrial in which prosecutors had more courtroom weapons at their disposal than they did the first time: They put five other women on the stand who testified that Cosby, married for 54 years, drugged and violated them, too.

At Cosby's first trial, which ended in a deadlocked jury less than a year ago, only one additional accuser was allowed to testify.

After the verdict, the district attorney became teary-eyed as he commended Constand for what he said was courage in coming forward. He said Cosby "was a man who had evaded this moment for far too long."

"He used his celebrity, he used his wealth, he used his network of supporters to help him conceal his crimes," Steele said. "Now, we really know today who was really behind that act, who the real Bill Cosby was."

Cosby could get up to 10 years in prison on each of the three counts of aggravated indecent assault. He is likely to get less than that under state sentencing guidelines, but given his age, even a modest term could mean he will die behind bars.

Constand, 45, a former Temple women's basketball administrator, told jurors that Cosby knocked her out with three blue pills he called "your friends" and then penetrated her with his fingers as she lay immobilized, unable to resist or say no.

It was the only criminal case to arise from a barrage of allegations from more than 60 women who said the former TV star drugged and molested them over a span of five decades. The onslaught all but destroyed his career and his good-guy image as wisdom-dispensing, sweater-wearing Dr. Cliff Huxtable on "The Cosby Show."

The business fallout from the verdict was almost immediate: Bounce, a TV network that caters to black viewers, announced it would drop reruns of "The Cosby Show."

Cosby's retrial took place against the backdrop of #MeToo, the movement against sexual misconduct that has taken down powerful men in rapid succession, among them Harvey Weinstein, Matt Lauer, Kevin Spacey and Sen. Al Franken.

During closing arguments, Cosby's lawyers slammed #MeToo, calling Cosby its victim and likening it to a witch hunt or a lynching.

Cosby's new defense team, led by Mesereau, the celebrity attorney who won an acquittal for Michael Jackson on child-molestation charges, launched a highly aggressive attack on Constand, calling her a "con artist" and "pathological liar" who framed Cosby to get rich.

Constand sued Cosby after prosecutors initially declined to file charges, settling with him for nearly $3.4 million over a decade ago.

The star witness for the defense was Marguerite Jackson, Temple employee who testified that Constand once spoke of setting up a prominent person and suing.

Cosby's defense team derided the other accusers as home-wreckers and suggested they made up their stories in a bid for money and fame.

But Cosby himself had long ago confirmed sordid revelations about drugs and extramarital sex.

In a deposition he gave over a decade ago as part of Constand's lawsuit, Cosby acknowledged he had obtained quaaludes to give to women he wanted to have sex with, "the same as a person would say, 'Have a drink.'" The sedative was a popular party drug before the U.S. banned it more than 30 years ago.

Cosby also acknowledged giving pills to Constand before their sexual encounter. But he identified them as the over-the-counter cold and allergy medicine Benadryl and insisted they were meant to help her relax.

The entertainer broke racial barriers as the first black actor to star in a network show, "I Spy," in the 1960s. He created the top-ranked "Cosby Show" two decades later. He also found success with his "Fat Albert" animated TV show and served as pitchman for Jello-O pudding.

Later in his career, he attracted controversy for lecturing about social dysfunction in poor black neighborhoods, railing against young people stealing things and wearing baggy pants.

It was Cosby's reputation as a public moralist that prompted a federal judge, acting in response to a request from The Associated Press, to unseal portions of the deposition.

Its release in 2015 set Cosby's downfall in motion, prompting authorities to reopen the criminal investigation and bring charges.

The Associated Press does not typically identify people who say they are victims of sexual assault unless they grant permission. Constand has done so. 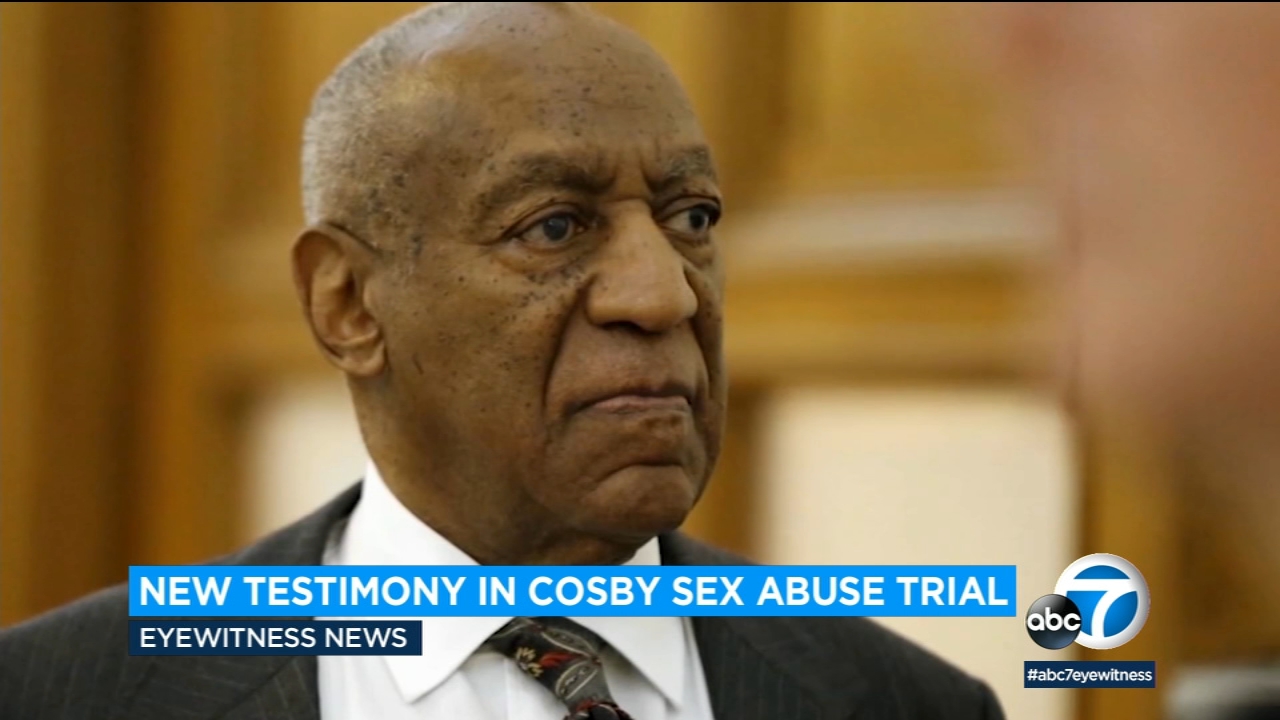 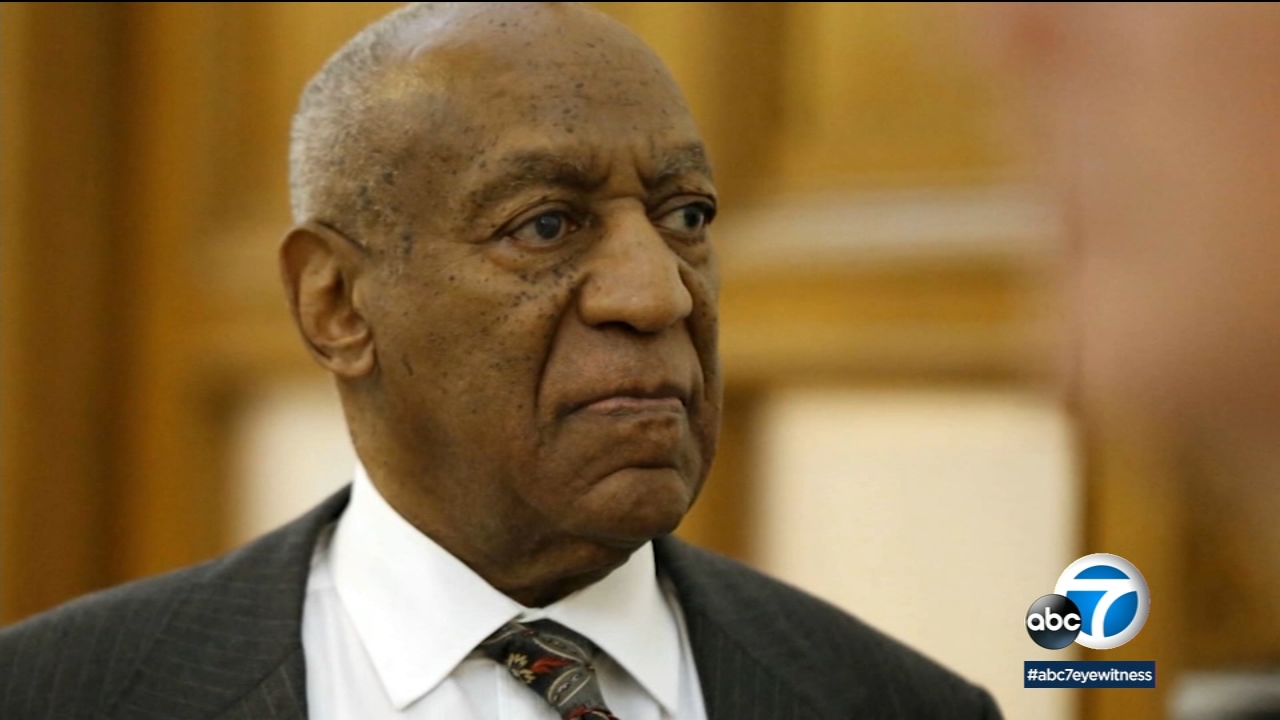 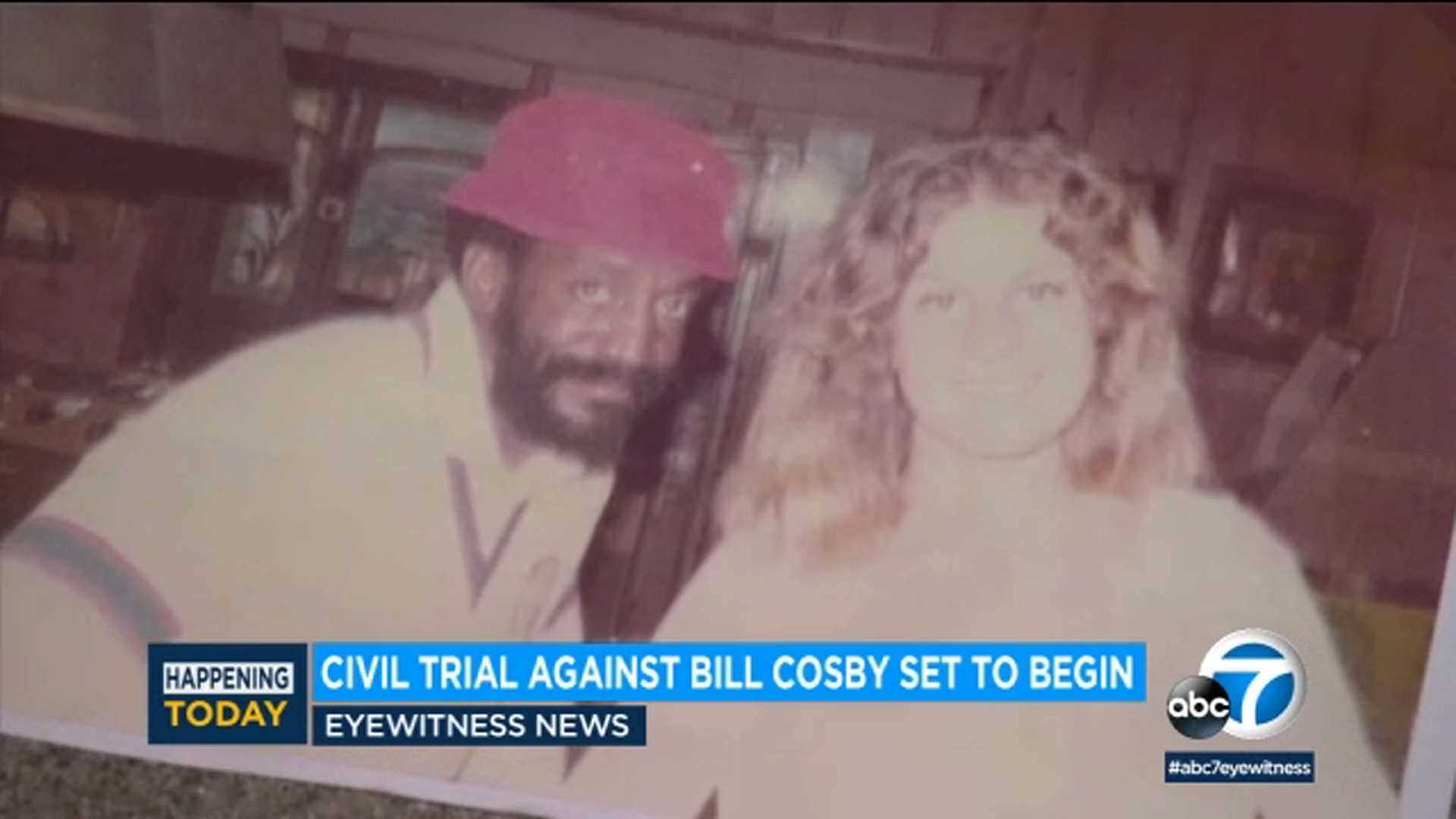