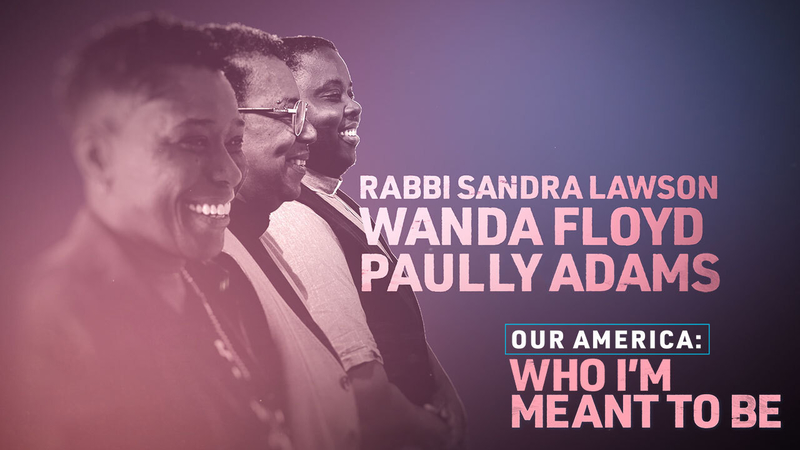 Lawson, a rabbi, Floyd, a reverend, and Adams, a pastor, recently met for the first time earlier this year to discuss their experiences.

"I'm just so happy to be around Black people," Lawson joked.

"To be with Black queer clergy -- we may not share our theology, but we share our experiences being in this country, in this society," she added.

The LGBTQIA+ community is not a monolith. It is multicultural, multi-ethnic, multi-faith and multidimensional. This Pride Month, we're celebrating members of that diverse community as a part of a special series called Our America: Who I'm Meant to Be. Click here for more stories from your city and around the country.
EMBED More News Videos

The LGBTQIA+ community is multicultural, multi-ethnic, multi-faith and multidimensional. Watch "Our America: Who I'm Meant To Be."

Despite their similarities, each had different relationships with religion in their early life and unique connections to their communities now.

Floyd, the online pastor for St. John's Metropolitan Community Church in Raleigh, North Carolina, said she grew up going to an affirming Baptist church in a small town.

"The pastor talked about God being of love," Floyd said. "I never heard condemnation. I never heard that who I was was an abomination."

Adams, on the other hand, said he didn't have similar support growing up in New York City.

"I knew in my family, being gay was ... a one-way ticket to hell. That's what I was raised to believe," Adams said. "I tried to push that all down and be what they wanted me to be, but that didn't work out too well."

As for Lawson, she said religion didn't play much of a role in her childhood. Later on, she found Judaism through a close friend who was a rabbi in Georgia. They engaged in political protests together against a state law that would prevent same-sex marriage in the wake of Lawrence v. Texas, the 2003 Supreme Court decision that ruled laws criminalizing same-sex relations were unconstitutional.

She described her faith as "this unbelievable pull" moving her life in a direction "that you really can't explain."

Though each followed a unique path toward a life of faith, Floyd said all three share a belief that their sexualities and spiritualities can and should coexist.

"If you deny your sexuality, you will be denying the divine within you," she said.

The intersection of these identities, however, comes with its challenges.

Floyd said as a gay, Black woman, she often feels like she is too Black for the gay community and too gay for the Black community. She recalled her experience pastoring for Imani Metropolitan Community Church of Durham while also co-leading the North Carolina Marriage Equality Coalition.

"I had people come to me and say, 'Pastor, we appreciate what you're doing and we support you, but we can't stand with you because of fear of losing the children, losing their livelihood, being ostracized by family,'" she said.

On the other hand, Lawson said she doesn't usually find queerness to be an issue in Jewish spaces.

"Jews understand that being queer is not going to keep you from being Jewish," Lawson said. "Black is different though. I faced huge amounts of racism in Jewish spaces."

"Most of the antisemitism that I get actually comes from other people claiming to be Jewish," she added.

All three said they want more representation of Black faith leaders within the LGBTQIA+ community.

"I think faith is the hardest thing that queer people deal with," Floyd said. "When you walk into a room of queer people and you say that you are a clergyperson -- it's like the air gets sucked out of the room. They don't know what to do with that."

Adams said he wishes he had a role model to make growing up with these intersecting identities easier.

"All the struggles, all the suicide attempts, all the depression ... it wouldn't have been there if I knew there was someone like me in this world," he said.

Both Adams and Floyd had similar advice for young, Black, LGBTQIA+ members of congregations anywhere: "God loves you and so do I. Just hold onto that," Floyd said. "It gets better. It always gets better."