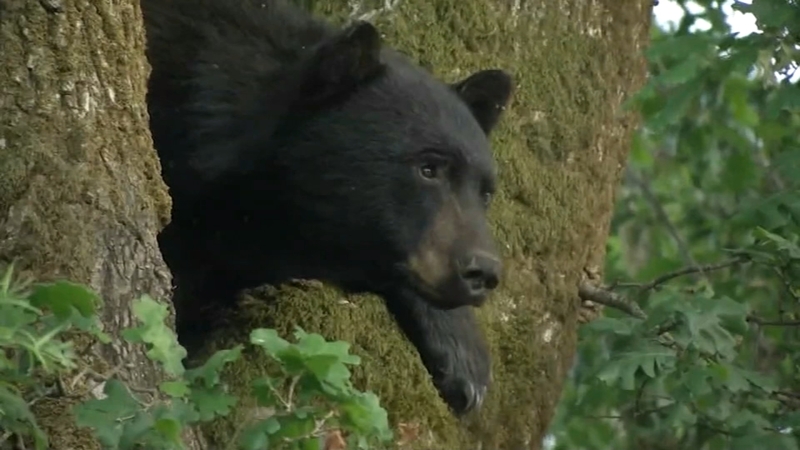 SAN FRANCISCO -- Whether it's in a backyard in Los Angeles or in a tree in suburban Marin County, if it feels like you're starting to hear of more bear sightings in more unusual places, you're not exactly wrong. Experts say they're noticing this happening, too.

According to Rebecca Barboza, a wildlife biologist with the California Department of Fish and Wildlife, the reasons for this vary, but an increasing bear population combined with the drought are believed to be leading factors.

"The bear population is expanding its range, so bears are showing up in areas where they've never seen before," Barboza told ABC7 News.

Barboza is part of a team now studying this trend, which has been seen in many parts of the state.

"In the urban areas, we have 24/7 access to food, water and shelter, and if you think about it in the wild, a bear might give birth to one or two cubs and those cubs may not survive until adulthood because their resources are limited," Barboza explained. "But in the urban area, their resources are basically unlimited, so the bears are able to give birth to multiple cubs and those cubs survive to adulthood."

Steve Searles, a wildlife expert in Mammoth known as "The Bear Whisperer," said the black bear population exploded in size after the extinction of the grizzly bear population in California.

"California has the largest population of black bears anywhere in the country," Searles said. "For every square mile of suitable habitat in California there is a bear."

He estimates there are roughly 35,000 black bears in the state.

"They're highly adaptable and your front lawn is just a salad for them," Searles said of the black bear, "So they will continue to breed and expand their home range."

Another factor is the drought. As food sources and creeks dry up, the bears may wander farther into urban areas.

"It certainly doesn't help the situation," Barboza said. "It would cause them to go in search of water and other resources," he said.

But Searles said people should not get so scared about encountering a bear in their neighborhood.

"We celebrate the fact we live with bears here in Mammoth, whereas in the city they lock down the schools and put up the helicopter and call the swat team," Searles said. "That really needs to change. It's our perception of the bear."

Barboza agreed and pointed out that black bears are the only bear species in California and that they are not inherently aggressive towards humans like other bears.

"The mere presence of a bear in someone's yard doesn't necessarily mean they're going to get injured," Barboza said. "They're just interested in food. They're not interested in interactions with humans."