The first historically Black colleges and universities were founded prior to the Civil War to provide young Black people basic education and training.
KABC
By Phillip Palmer 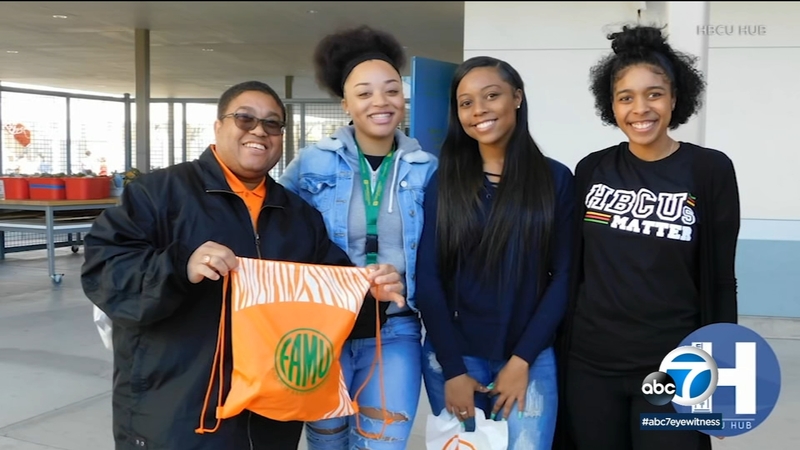 The first historically Black colleges and universities were founded prior to the Civil War to provide young Black people, who could not attend established colleges due to racial discrimination, basic education and training.

"Had it not been for them, these great, I call them great institutions, honestly, there are thousands and thousands of us would not have gotten an advanced degree," says John Hayes of Pasadena. Hayes also sees a growing problem for HBCUs.

According to data from the National Center for Education Statistics, in 1976, 35% of degrees earned by Black students came from HBCUs. But in 2018, that number had dropped to 13%.

The Pew Research Center found that in 1980, 17% of all Black college students were enrolled at an HBCU, but that number dropped to 8.5% in 2015. Those declining numbers led Hayes to start the HBCU Legacy Foundation.

"The primary thing that I want to do is restore and preserve the legacy of historical Black colleges and universities. They are closing," Hayes says. "There are some that are on the last leg so to speak and people are forgetting them."

Along with the hopes of placing a monument on the National Mall in Washington D.C. by 2025, the HBCU Legacy Foundation wants to create a scholarship to help underprivileged students attend the HBCU of their choice.

How to make that choice might fall to the world's first app connecting high school students to admissions recruiters at HBCUs across the country.

Many local students might never have heard of the schools before because almost all HBCUs are located east of the Mississippi River.

"Where is that student in Crenshaw, California who hasn't been outside of his block? How does he figure out what these schools are and the opportunities that they have to offer? That's what led us to develop the application to close the opportunity gap," says Jonathan Swindell, CEO of HBCU HUB.

HBCU HUB can even connect student athletes with coaches at HBCUs, which in general don't have the recruiting budgets of larger schools, but have a lot to offer, according to NBA veteran Kyle O'Quinn. O'Quinn is the only HBCU product selected in any of the past 15 NBA drafts, but fondly remembers his time at Norfolk State University.

"You just start seeing people that look like you, they talk like you and probably went down the same road as you have so with all that being said, you just naturally relate to them a little bit better," he said.

Preserving the past and strengthening the future.

"We've put in years of blood, sweat and tears to show that we do actually care for the students and we will continue to keep our services free to students because that's how they gain access and know the importance of HBCUs," says Swindell.