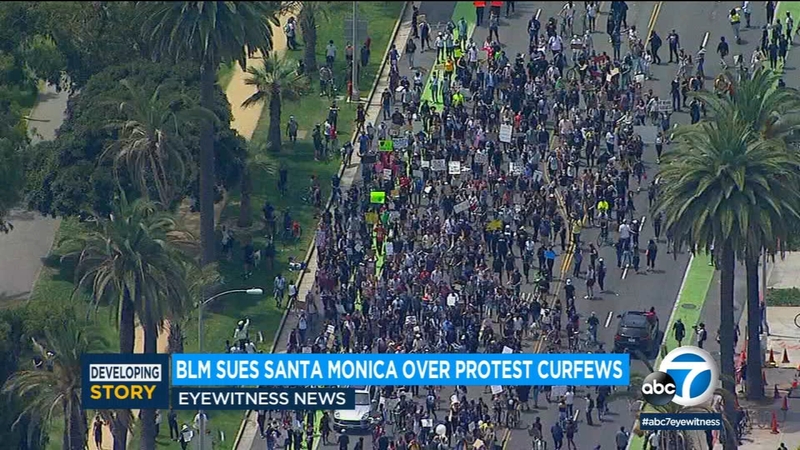 The lawsuit, filed late Monday in Los Angeles federal court, also alleges false arrest, assault and battery on behalf of more than 300 people who contend they were shot with projectiles by Santa Monica Police Department officers, targeted for arrest and transported to a makeshift jail before they were released in Los Angeles "and warned they would be rearrested if they came back to Santa Monica.''

Plaintiffs allege that the citywide curfew order issued May 31 last year was a tactic used to stifle political protest against police violence at a time when hundreds of peaceful protesters sought to express their opposition to the police violence that resulted in the deaths of Floyd and other Black men and women across the country.

More than 50 people have been arrested so far through the work of the regional "Safe LA Task Force" that was established to track down the criminals.

Although there was looting and vandalism in some parts of Santa Monica during the demonstration, the criminal activity was not in the area of the protests, according to the lawsuit. However, the SMPD and assisting agencies focused on the protesters and "tried to prevent the peaceful protests by instituting curfew orders on short order to take effect at varying times'' on May 31 and June 1, 2020, BLM-LA contends.

The proposed class-action suit, which names the city, ex-SMPD Chief Cynthia Renaud, who retired last October, and 10 as-yet unnamed officials as defendants, alleges Santa Monica's "policies and failure of policies, including the failure to train its officers in constitutional responses to peaceful demonstrations, caused the unlawful action taken against plaintiffs.''

The suit also cites a review report prepared for the city by an outside group, the Office of Independent Review, which determined that the SMPD "had no adequate plan, if they had any, to interact with peaceful protesters while responding to individuals and groups engaged in unlawful conduct,'' according to BLM-LA.