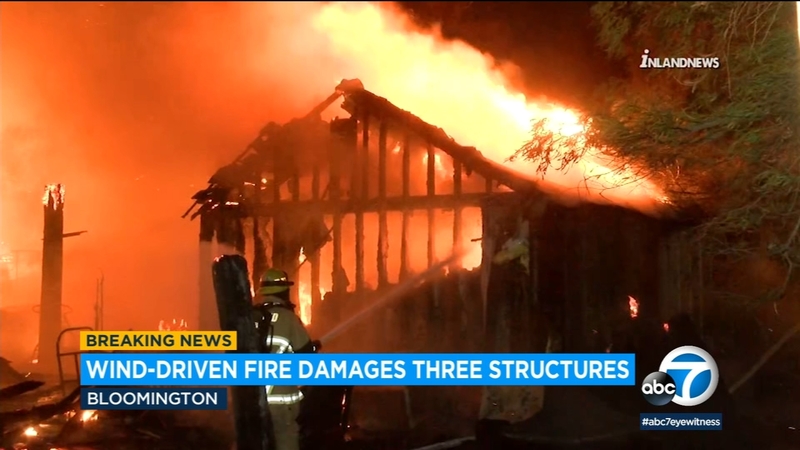 Firefighters said the blaze initially started around 12:30 a.m. as a bush on fire and quickly spread as winds fanned flames. When fire crews arrived, strong winds blew embers across the neighborhood, which created several spot fires.

Two homes located in a compound surrounded by vegetation were damaged and one home was destroyed in the fire, according to fire officials. It is unclear if the homes were unoccupied at the time. No injuries were reported.

The fire was knocked down several hours later, but fire crews continued to search the community for hot spots amid erratic winds.

A high-wind warning is in effect until noon Thursday for the San Bernardino and Riverside County valleys and Inland Empire, with winds northeast winds 20 to 40 mph and gusts to 70 mph.

"The winds will increase from the north and the northeast overnight, and peak Thursday morning over the northern areas favoring Santa Ana winds in Orange, San Bernardino and Riverside counties, especially immediately below the Cajon Pass and the Santa Ana Mountains,'' the National Weather Service said.

"The threat for damaging Santa Ana winds will come to an end by Thursday afternoon.''

The NWS also warned that, "Damaging winds could blow down large objects such as trees and power lines. Power outages are possible. Travel could be difficult, especially for high profile vehicles.''