"This is where astrophysics was invented. The first half of the 20th century was about Mount Wilson. It was the only place in the world where you could do that type of science."
KABC
By Josh Haskell 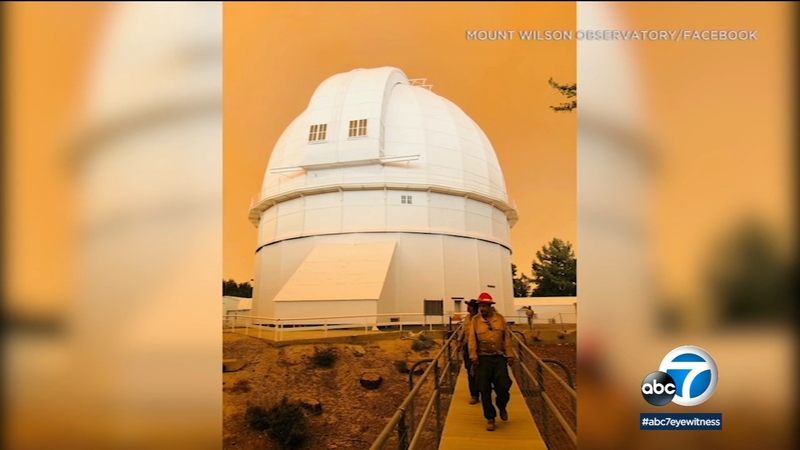 MOUNT WILSON, Calif. (KABC) -- The Bobcat Fire is within 500 feet of the famed Mount Wilson Observatory which was founded in 1904.

"A sense of impending doom that this great national treasure might soon be lost or at least severely damaged by the fire," Anderson said.

RELATED: Bobcat Fire crews race to protect Mount Wilson
"I'm really afraid because it looks a lot closer than it may be, but I was watching most of last night, it was frightening. What I saw, I did not like," said Tom Meneghini, executive director of the Mount Wilson Institute.

The remaining four Mount Wilson Institute employees evacuated the facility Monday night, leaving roughly 50 firefighters on site to protect the landmark and an estimated $1 billion worth of transmission towers, a key site for TV, radio and government agencies.

We give our sincerest thanks to the firefighters who are on the ground defending our observatory as well as the pilots flying aircraft for fire suppression. Here’s a picture from of firefighters crossing the "Einstein Bridge" from the 100-inch dome. #BOBCATFIRE pic.twitter.com/yrbLPtnhJh

"It takes a long time to put out a fire in this rugged terrain. You can't get people on the ground there. No matter how good the firefighters are, the terrain is simply too rugged," said Anderson.

That's why Mount Wilson invested in a fire suppression system following the 2009 Station Fire, rebuilding a half-million-gallon water tank with 33 places for the remaining 12 engine companies to access water.

"This is a world-significant institution in terms of its instruments, the telescopes, the people who work there, the scientific endeavor that was accomplished there," said Meneghini.

"This is where astrophysics was invented. It was done on Mount Wilson. The first half of the 20th century was about Mount Wilson. It was the only place in the world where you could do that type of science."
Report a correction or typo
Related topics:
mount wilsonlos angeles countybrush firebobcat firewildfire
Copyright © 2021 KABC-TV. All Rights Reserved.
TOP STORIES
WeHo suspect out on bond 1 day after alleged kidnapping
Imprisoned 'Dating Game Killer' Rodney Alcala, 77, dies in California
Comedian Jackie Mason dies at 93
SoCal man, 34, who mocked vaccines dies of COVID-19
'Stuntman' documentary highlights a legend in the business
Pasadena City College named top community college for veterans
Pearl Harbor remains identified as Navy sailor from CA
Show More
Overdose deaths from meth up in LA County during pandemic
Memorial bike ride honors 1st LAPD officer to die from COVID-19
Mother arrested after 2 young kids left in hot Bakersfield car
Shyamalan's 'Old' presents new ways to think about aging
Vaccines are 'personal decision,' Hillsong Church founder says
More TOP STORIES News