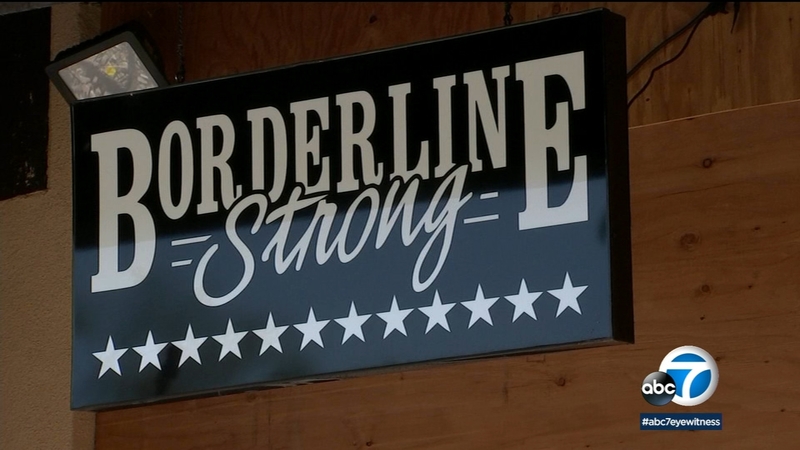 THOUSAND OAKS, Calif. (KABC) -- A memorial outside the Borderline Bar and Grill in Thousand Oaks continues to grow one year after the deadly mass shooting.

For Brian Hynes and Troy Hale, co-owners of the restaurant and bar, it's been a whirlwind.

"And you just think - within the year - every single person here has had a birthday or an anniversary or something," Hynes said.

Right outside the door of Borderline Bar and Grill, the 12 lives that ended too soon are remembered.

Some photographs have since faded at the memorial in Thousand Oaks, but countless notes, hats and messages of love continue to arrive from around the world.


One year later, the once bustling bar remains closed, for now.

"If it was up to us, we would," Hale said. "We're just waiting on other people to make decisions before we can."

Hynes and Hale say before they can reopen, they're waiting on proper steps to be approved by the city, insurance companies and the building's owner.
Reconstruction is needed following the devastating shooting that unfolded inside on Nov. 7, 2018.

That evening, Hynes heard the gunfire as he was pulling up to the parking lot and officers had swarmed the area.

It's been a year of physical and spiritual healing for Wendy Sparks, whose daughter Noel was killed last year in a mass shooting at the Borderline Bar and Grill.

"I saw kind of the mayhem and people trying to rally together and help each other, so it was definitely scary," Hynes said.

Almost daily, people continue to come to pay their respects at the memorial.

It has become a place for healing, and while Borderline remains closed for now, the owners have taken the victims' families inside at their request.

"We've had some people reach out that were there that night, some of the families have reached out and have asked to go inside, to try to understand, so I've done a lot of those walk-throughs," Hynes said. "Kind of walk people through the building and get the closure they need.

"The dance floor, they'll go on the dance floor and a lot of people will come in and the first thing they'll do is finish the dance they were doing that night," Hynes said.

"It's rough, but I've had people come back and say they slept better that night than they have since," Hynes said. "And that's healing for me."

Their friends are also among the victims, including Justin Meek, a promoter for the bar.

"He was one of those guys who just wanted to be a part of Borderline so bad, that he had so much drive that we wanted to hire the guy," Hale said.

They say each of the victims' families agree that Borderline should reopen.