"There was nothing I could do. It could do whatever it wants," Charlie told 'GMA.'
KABC 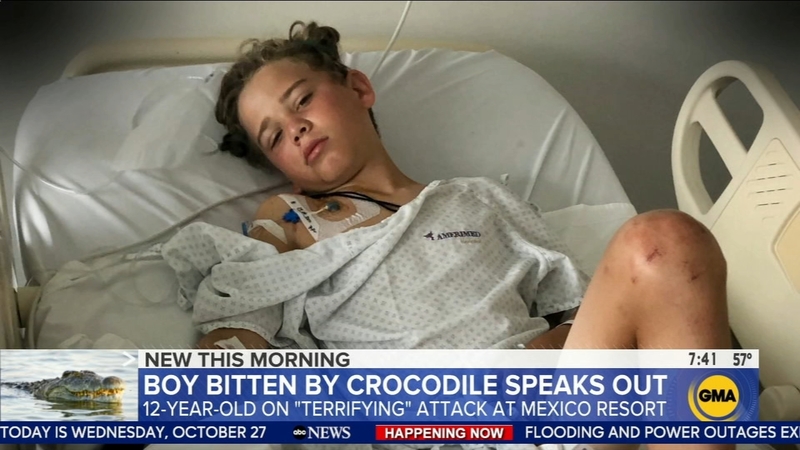 CANCUN -- A 12-year-old boy who was bitten by a crocodile at a Mexican resort spoke to "Good Morning America" on Wednesday in his first television interview.

It took a group of people to get Charlie Buhl free from the massive 13-foot crocodile at Club Med in Cancun back in June.

His family had to extend their trip for four weeks after he underwent several procedures.

He is now back home in Philadelphia as his recovery continues.

"There was nothing I could do. It could do whatever it wants," Charlie told "GMA." "It was so strong."

Charlie was playing hide and seek out on the family vacation when he hid in a set of stairs near a lagoon.

Moments later, he said he felt something grab onto his leg.

"I can feel like it almost pushing on the inside of my leg, like someone was just digging their nails into your arm," he said.

Nearby guests and hotel employees at Club Med rushed to Charlie's aid as he struggled against the reptile.

"The workers helped pull me out, and they were picking the crocodile's eyes and putting a blue pillow on its head. And then it finally let go," Charlie said.

Charlie's mother Jennifer Buhl posted about the incident on a blog on her company's site, Happy Hour Headshot, last month.

In the blog post, she said one of those who came to Charlie's aid was a trauma nurse named Adrian.

Adrian's sister Mary was one of the witnesses at the scene. When Mary shouted 'Is anyone a doctor?' and nobody responded, she quickly ran to her phone and called Adrian who came running to the lagoon.

In her post, Jennifer wrote that another witness called Adrian "the biggest gift and the lifesaver of the night: so calm and precise and logical and unemotional and just focused on doing what she needed to do."

"Adrian stayed at Charlie's leg and was there when I arrived," Jennifer wrote.

Charlie was treated at a local hospital where doctors initially thought they'd need to amputate his leg.

That was not the case, and he's now able to walk and run.

Jennifer said the resort is covering all of his medical bills.

"I think Club Med has acted really honorably and really responsibly. They immediately closed off the area, put a guard there 24/7, put up signs, lights," Jennifer Buhl said.

At another resort in Puerto Vallarta, just a month after Charlie's brush with a crocodile, 18-year-old Kianna Hummel punched her way to freedom after a 12-foot-long crocodile suddenly grabbed her ankle and pulled her underwater right on the beach.

"I just started hitting it as hard as I could and then it just kept taking me under the water," Hummel said.

What was supposed to be a relaxing getaway before starting college this fall, turned into a real life nightmare for 18-year-old Kiana Hummel.

Ron Magill, a wildlife expert and the communications director with Zoo Miami, shared a warning about crocodiles.

"They can exist at anytime, anyplace in those areas, so people need to always assume that they can be there," Magill said. "Do not go into those bodies of water at night, or at dusk or at sunrise."

In her blog, Jennifer said Charlie is not giving up hope on his full recovery.

"He is now walking with an awkward gait, like he has a wooden leg, since he doesn't yet have full range of motion or strength. Though it is not guaranteed, running, jumping and playing soccer is expected to return, though it will take several months and he will miss this year's soccer. Charlie believes he will make full recovery, and I am not going to argue that," Jennifer wrote.

Charlie said he has a new appreciation for his cold-blooded acquaintance.

"For Halloween, me and two of my friends are building this giant crocodile [costume] that all three of us are going to fit in, and it's 16-feet long," Charlie said.