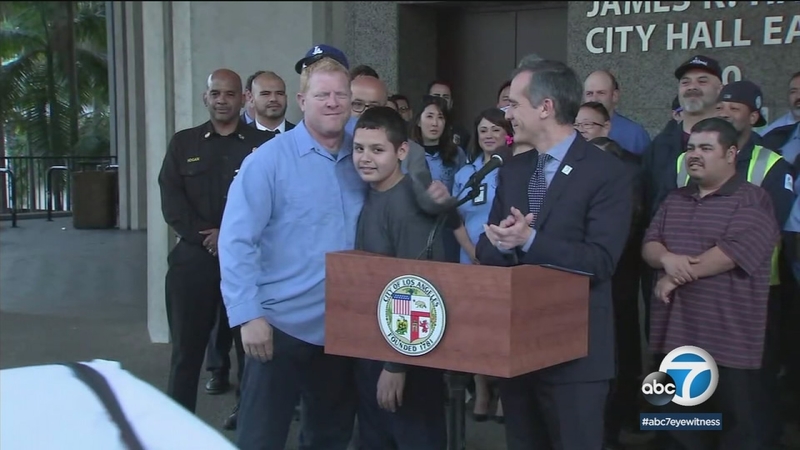 LOS ANGELES (KABC) -- A 13-year-old boy who fell 25 feet into a drainage pipe in Griffith Park reunited with his rescuers for the first time since being trapped in the city sewer system.

Department of Sanitation workers Michael Adams and Kurt Boyer were among hundreds of first responders searching furiously for Jesse Hernandez on Easter Sunday. Using high tech cameras to peer into a web of drainage pipes that sit below the city, they narrowed their search and found Jesse.

Adams and Boyer knew they were racing against time to find the missing boy.

"The smell of the sewage. It's completely pitch black in there. It's definitely a tough environment to be in," said Boyer.

Jesse Hernandez is back with his family after spending more than 12 hours trapped in the city sewer system under Griffith Park.

Hernandez's family never gave up hope on that stressful night, and now Jesse is expressing his eternal gratitude to city workers who brought him home.

"I'm so thankful for everybody who was involved in my rescue. Thank God for giving me another chance to live," said Jesse.

Mayor Eric Garcetti called the rescue an "Easter miracle" for Jesse and his family at a press conference on Friday. But the search involved hundreds of firefighters, park rangers and department of Sanitation workers.

For their work, the Hernandez family and LA Mayor Eric Garcetti couldn't be more grateful.

These two men were the first to find Jesse Hernandez after he’d been in the sewer for more than 12 hours. The Dept. of Sanitation workers say they don’t know how he was able to survive in the toxic environment for so long. pic.twitter.com/j9PeBZwZpf

"We've got such amazing firefighters and police officers and god bless them but same for our Sanitation workers and our park rangers," Garcetti said.