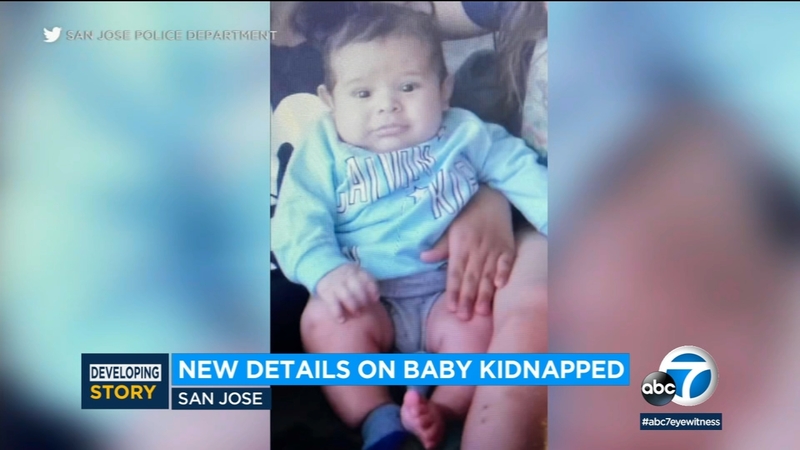 According to police, the investigation revealed that the suspect who entered the San Jose residence and kidnapped Brandon, seen on surveillance video with a baby carrier, was Portillo.

During the investigation, detectives learned that before the kidnapping, Ramirez had run errands with the victim and the victim's grandmother. As Ramirez' statement changed several times, detectives detained her as a person of interest.

Sandoval was identified as another suspect and also interviewed. Based on their statements, and evidence obtained during the investigation, detectives arrested both Ramirez and Sandoval.

Brandon was found safe Tuesday morning, after a 20-hour search that ended miles from his grandmother's home, where he was abducted.

The baby's grandmother told police she was unloading groceries when the baby was taken from the apartment on Elm Street.

Click on the press release link for additional info:https://t.co/qFo2uwMphQ

The massive search involved the FBI. Police had been searching for a man seen in surveillance video and it was a tip that finally got Brandon back home.

It was just after 1 p.m. Monday when Brandon was reported missing.

.@SJPD_PIO: 3 ppl are in custody connected to kidnapping of #BabyBrandon. This includes man seen w baby carrier, in surveillance vid they shared.

"Right then and there, I thought that was the guy," neighbor Marc Arce said.

Arce's surveillance camera gave our only glimpse of the kidnapping, instrumental in the police's investigation.

"You can just tell, when he was walking towards the house, or the apartment, it was light," Arce described. "And when he had it walking back, it looked like there was some weight in there."

The kidnapping led to a massive search for the baby that involved the FBI.

"There's still much more for the detectives to do," SJPD Assist. Police Chief told reporters on Tuesday. "So I wouldn't want to give any information that could, you know, impede that investigation."

In large part thanks to an employee of a nursing home employee whose facility is just across the street from a home where Brandon was found.

"One of my employees that works here felt a little bit suspicious and saw something that was out of character," said Chris Martinez who is the facility's director of operations. His employee wished to be unnamed and did not want to speak to reporters.

What she saw was a van, a silver 2011 Nissan Quest with a distinct sticker on the back window. Around 4:50 a.m. California Highway Patrol tweeted out a picture, description and license plate of the van.

That tweet was later deleted with San Jose police telling KGO-TV that they couldn't confirm the CHP information. It's still unknown why the two agencies had the breakdown in communication. But the tweet was up long enough for that vehicle information to come out and is what led that employee to notice the van.

Martinez was there just after that employee called the police and witnessed what happened.

"(She) saw that something was a little bit out of place. She saw the vehicle, she made a call to San Jose P.D.," Martinez said, "Eventually, then the San Jose Police Department did show up and they went right over and they blocked the vehicle both the front and the back and they went to the alleged suspect's house and at that point, they went they invaded the home."

Maria Alvarado, who has a 3-month-old herself, says she lives just under the home that police invaded. She said in Spanish that she was shocked to hear so much commotion outside of her home and police officers. In disbelief that the missing 3-month-old baby was so close.

Monday morning at the scene, at least five officers with vests that said San Jose Police Gang Unit were seen carrying evidence from that home. The police did not elaborate on why the special team was there.

They say one of the three suspects in custody includes the man seen in that surveillance video. A woman who was with the child's grandmother before he was abducted was also detained.

Police say that the initial investigation shows a link between the family and the suspects. They say the investigation into what happened, and how the baby spent the last 20 hours continues.

"As soon as I heard the baby has been found, I just cried," neighbor Stephanie said.

"We were up all night talking how it happened, refreshing Twitter, everything right?" neighbor Kassandra Ramirez said. "So this morning was just turning the news on and it was good news. I'm shaking talking about it. Just relieved and overwhelmed for sure with a lot of emotion and happiness."

Knowing it was so easy to abduct the child sent fear into neighbor Stephanie, a neighbor who did not want to be shown on camera.

From sadness and fear to excitement and relief as neighbors were overjoyed to hear the baby is back with his family once again.

"Super relieved for the mom, for the family," neighbor Leandra Duran said, "It's scary but glad he was found safe in a short amount of time too."

Other neighbors are still trying to make sense of the kidnapping they say seems targeted.

"When they said a baby was taken, that was very hard for me. Because I have a lot of grandchildren and a lot of great grandchildren," the family's downstairs neighbor who asked to be identified only as Elva said.

She added, every aspect of the case has made her emotional.

On Tuesday, Brandon was safe with his family who told police they wanted their privacy and did not speak at this time.