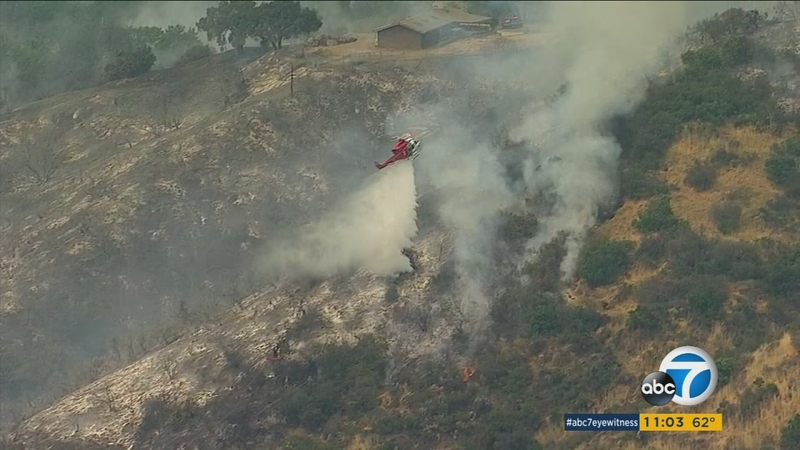 The fire was first reported around 12:45 p.m. near the 2900 block of Mandeville Canyon Road, according to the Los Angeles Fire Department.

By 4 p.m. it had spread to more than 30 acres over steep terrain in the Mandeville Canyon area just above Brentwood and reached 55 acres later in the evening.

Still, firefighters said they had gotten a good handle on the fire, listing it at 70 percent containment by evening and they expected to reach 100 percent overnight.

Officials said they believe the fire was started accidentally by a contractor doing weed and brush clearance in the area.

No injuries or structural damage were immediately reported, but at least five homes were evacuated as a precaution. Hikers were being warned to leave the area.

Mandeville Canyon is located just northwest of the Getty Center.

The blaze was burning in heavy brush amid winds of 5-10 mph, the LAFD said.

Helicopter were performing water drops over the scene as a massive cloud of smoke rose above L.A.'s Westside.

@ABC7 My backyard in Mandeville Caynon getting a little toasty... pic.twitter.com/mDU2pGE5jT

The flames came as close as 200 feet to some homes, but firefighters credited good brush clearance practices in the area for helping keep homes safe so far.

They also issued reminders to the public about safe practices for brush clearance:

-- If possible, avoid the use of equipment with metal blades that can cause sparks when they hit rocks.