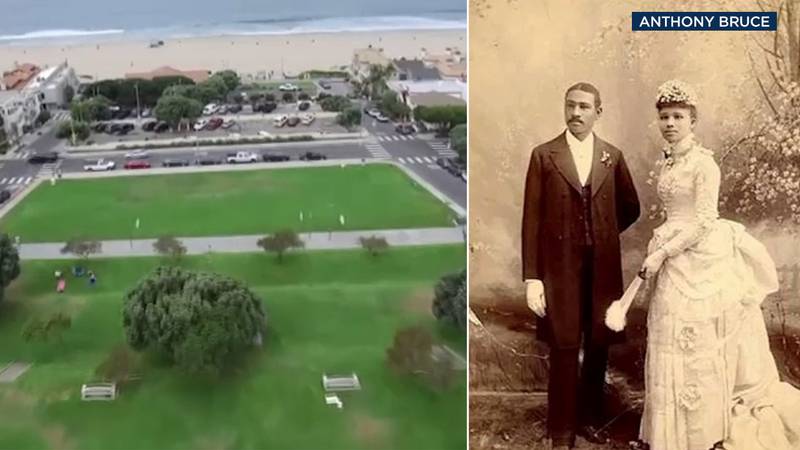 LOS ANGELES (CNS) -- A bill to return a scenic and valuable parcel of Manhattan Beach land to the descendants of a Black couple who once operated a beach resort there advanced to the Senate floor.

Sen. Anthony Portantino, D-La Canada, chair of the Senate Appropriations Committee, determined that SB 796 had no significant state costs and applied Senate Rule 28.8, sending it directly to the Senate floor for a second reading without a hearing in the committee.

The Los Angeles County Board of Supervisors voted unanimously April 20 to direct the county's CEO to come up with a plan to return the property to the family and to support the bill, whose passage is required to make the transfer possible.

Los Angeles County is taking the first steps to return a scenic parcel of Manhattan Beach land that was wrongfully seized from a Black couple nearly 100 years ago, officials announced Friday.

"This was an injustice inflicted upon not just Willa and Charles Bruce -- but generations of their descendants who almost certainly would have been millionaires if they had been able to keep this property and their successful business,'' Supervisor Janice Hahn, who introduced the motion, said in a statement following the motion's passage.

"When I realized that the county now had ownership of the Bruce's original property, I felt there was nothing else to do but give the property back to the direct descendants of Willa and Charles Bruce.''

Transferring a portion of what is known as Bruce's Beach requires state legislation to remove restrictions on the land, which now houses the county's lifeguard training center.

Willa and Charles Bruce purchased land in 1912 for $1,225. They eventually added some other parcels and created a beach resort catering to Black residents, who had few options at the time for enjoying time along the California coast.

The Bruces were undeterred and continued operating their small enclave, but under increasing pressure, the city moved to condemn their property and other surrounding parcels in 1924, seizing it through eminent domain under the pretense of planning to build a city park.

The resort was forced out of business, and the Bruces and other Black families ultimately lost their land in 1929.

The exact parcel of land the Bruces owned was transferred to the state, and then to the county in 1995.

The city park that now sits on a portion of the land seized by the city has borne a variety of names over the years. But it was not until 2006 that the city agreed to rename the park "Bruce's Beach'' in honor of the evicted family. That honor, however, has been derided by critics as a hollow gesture toward the family.
Report a correction or typo
Related topics:
societymanhattan beachlos angeles countybeachesracismreal estate
Copyright © 2022 by City News Service, Inc. All Rights Reserved.
TOP STORIES
Man accused of fatally stabbing UCLA grad student arrested
Voting bill collapses, Democrats unable to change filibuster
LA County sees 94% jump in homicides in 2 years, LASD stats show
TX mom pregnant with 6th child dies from COVID complications
Increase in SoCalGas bills a shock to some local customers
Homeowners 'wasting water' will get more than a fine, officials say
Vice President Kamala Harris to visit San Bernardino on Friday
Show More
COVID-19: 59 new deaths in LA County, positivity rate at schools drops
Man charged in attack on OC vaccine-clinic workers
Starbucks no longer requiring US workers to be vaccinated
Cardi B offers to pay for funerals of all 17 Bronx fire victims
Man sentenced to life in prison for violent crime spree in LA County
More TOP STORIES News