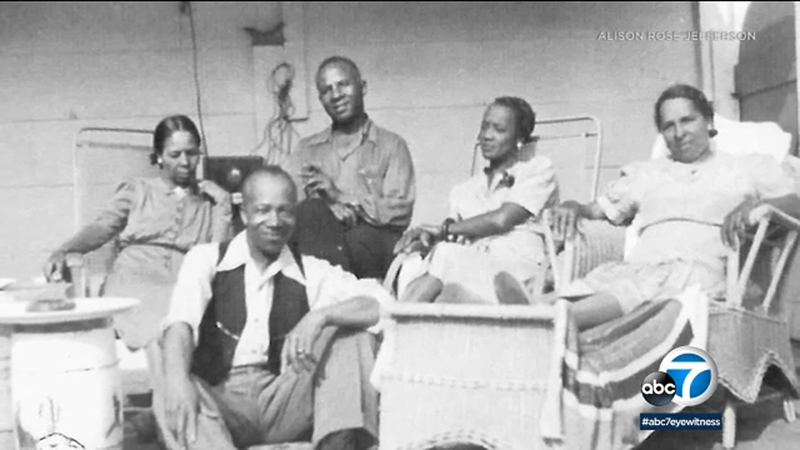 MANHATTAN BEACH, Calif. (KABC) -- Black families settled in Manhattan Beach in the early 1900s, but the city chased them out. Now city leaders have created a task force to confront its racist past and explore options about how to atone for past sins.

"There were hate crimes committed down there, our people were terrorized," says Duane Shepard, Sr.

Shepard is referring to the Bruce family, along with a handful of other Black families who came west in search of the American Dream and settled in what was then a relatively isolated beach town.

Willa and Charles Bruce bought beachfront property in Manhattan Beach and started a small business in 1912.

"The Bruces were pioneers," says Alison Rose Jefferson, a historian and author of the book "Living the California Dream: African American Leisure Sites during the Jim Crow Era."

"Bruce's Lodge is what it was originally called... they started out small with a stand where they're selling sodas," says Rose Jefferson. "And then it grew into a place where they had a building and dance pavilion... a little snack shop and then a couple places where people could stay overnight."

From the very start, the Bruces and other Black families in the area faced hostility and blatant racism.

"I think the surrounding people of the community began to feel threatened by that, and that there would be more Blacks coming in and then we would overrun the place," says Shepard, a distant cousin of the Bruce family.

The Ku Klux Klan set fire to a mattress on the Bruces' property, tires were slashed and white neighbors roped off the beach in front of Bruce's Lodge and set up no-trespassing signs.

"The white communities just were seething at the fact that people, that we ex-slaves were now prospering in the way that we were," says Shepard. "And so they found any little excuse to come in and burn us out, to tear down our property."

The families stood their ground and refused to leave. So, the city condemned the neighborhood in 1924 and seized the land through eminent domain. The city claimed there was an urgent need to build a public park on that particular stretch of land.

"It stayed empty, vacant for 30 years," says Shepard. "It was supposed to be a park."

The city didn't develop the land into a park until the late 1950s. The park went through a series of name changes before it was renamed "Bruce's Beach" in 2007, but a plaque on the site falsely credits a white developer, George Peck, with allowing the Bruces to originally buy the land.

"They put George Peck's name up there on top as the white savior father who helped Black people to open their resort, when that's not true at all," says Rose Jefferson.

In recent months of social unrest, the park has been reclaimed by some to celebrate the Bruces' pioneering spirit and remember the civil-rights struggle that took place on the land. There is a renewed push to remove and replace the plaque with one that's historically accurate and pays tribute to the Bruces and other families.

"It doesn't tell the whole story," says Shepard of the current plaque. "They didn't talk about the terrorism that they went through, the burning of the crosses."

The city created a task force last month to consider options to remove and replace the plaque, issue a formal apology to the Bruce family and include the history in school curriculums.