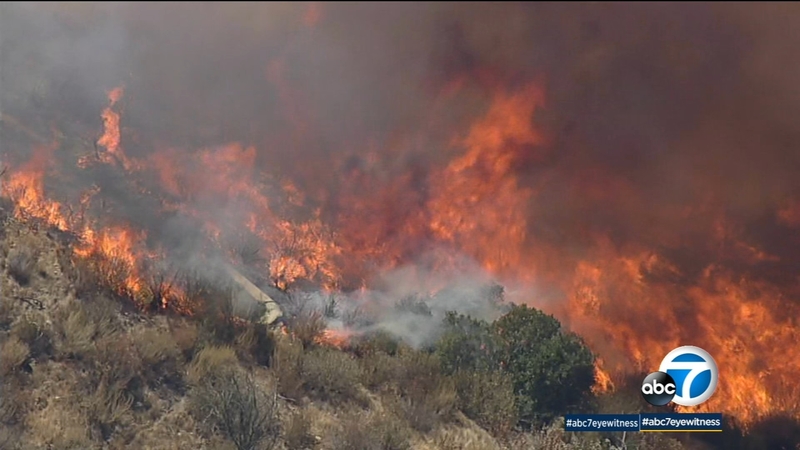 SUNLAND, LOS ANGELES (KABC) -- Firefighters were battling two brush fires that broke out in Southern California Friday as a heat wave settles over the region.

The larger of the two blazes, dubbed the Tujunga Fire, broke out around 1 p.m. in the Sunland area. Fire officials said the flames were burning at a moderate speed in 10 mph winds near Oro Vista and Big Tujunga Canyon roads.

The flames have burned about 10 acres but were moving against the terrain, "meaning the terrain features are slowing the fire progress," according to an LAFD statement. "However, a shift in the wind could create conditions for faster fire spread."

Some time before, a smaller brush fire broke out in the Box Canyon area near Chatsworth and was threatening at least one home.

The blaze, dubbed the Shirley Fire, ignited shortly before noon Friday and began burning uphill in the 200 block of Box Canyon Road, according to the Los Angeles Fire Department.

Ventura and Los Angeles county firefighters were also on scene trying to get control of the flames, which burned between large boulders on a rugged hillside.

Crews managed to gain the upper hand in the fight, holding the flames at about 25 acres and mitigating the threat to nearby structures.

A man was detained for questioning but the LAFD stressed that there is "no confirmation, at this time, of this being a suspicious start."

No injuries or damage to homes were reported.

Firefighters are battling a small brush fire that broke out in the Box Canyon area near Chatsworth and is threatening at least one home as a heat wave settles over Southern California.