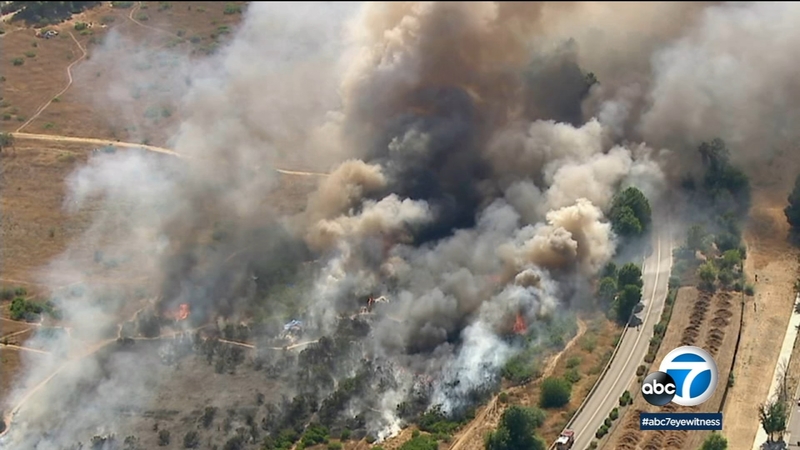 VAN NUYS, LOS ANGELES (KABC) -- Firefighters battled a large grass fire in Sepulveda Basin Tuesday afternoon which displaced about 100 homeless individuals who had been living in the area.

More than 100 firefighters, with help from two helicopters, battled the blaze near Balboa Park.

It charred about 7 acres of brush and destroyed some homeless encampments and vehicles before firefighters got the flames under control. Fire department officials had initially estimated the size at 10 acres, but later revised the figure downward.

By about 5 p.m. - about 90 minutes after the fire was first reported - firefighters said they had contained the fire and stopped its forward progress.

Grateful for the quick, courageous work of @LAFD to put down a brush fire in Sepulveda Basin and help get vulnerable Angelenos to safety. These dangers are one reason why we are accelerating our work to bring our homeless neighbors indoors.

No permanent structures were destroyed but AIR7 HD was over the scene as flames engulfed several homeless encampments in the area.

Burbank Boulevard, from Balboa to the 405 Freeway, was shut down during the busy evening commute hour. It was later reopened as firefighters got control over the flames.

He added homeless encampments typically have small propane tanks to help with cooking and heating, many of which exploded in the fire.

Firefighters battle a large grass fire in the northern part of the Sepulveda Basin that broke out Tuesday afternoon.

At a press conference Tuesday afternoon, LAFD Assistant Chief Patrick Butler also added that the area poses more dangers to firefighters than a standard brush fire on vacant land because of the encampment.

"It's an extremely hazardous area," Butler said. "Because of propane tanks, potentially some illicit activity in there. Some debris and other hazards and toxins we wouldn't normally encounter in a normal riparian brush area."

The displaced individuals were sent to the Balboa Recreation Center as the city worked to find new shelter for them, with assistance from the Red Cross, said Butler.

"For us as firefighters, we have a big heart. We don't care what your condition is, why you live out here, but we're here to help and support you."

Nobody would be allowed back in the encampment for some time as crews continued to stomp down hot spots, he added.

There were no reported injuries.