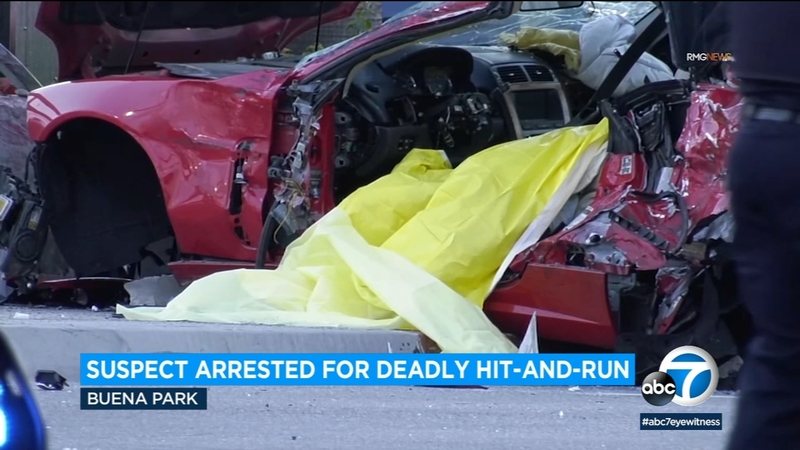 Arrest made in hit-and-run that killed Buena Park father

BUENA PARK, Calif. (KABC) -- A suspect has been arrested in a hit-and-run that killed a Buena Park father as he took his wife of nearly 30 years out to dinner.

Keith Alan, a father of three, died at the scene after an SUV ran a red light on Aug. 14 and struck his sedan as the couple headed to their favorite restaurant.

Buena Park police on Friday said Nathaniel Machado, 24, of Anaheim, surrendered in court and now is in custody for vehicular manslaughter and other charges.

Police say the suspected hit-and-run driver ran a red light on Auto Center Drive at Western Avenue, hitting the couple's Jaguar. Keith died at the scene and his wife Tami was hospitalized in intensive care with serious injuries.

Police say everyone in the suspect vehicle fled on foot. Video from the scene shows the couple's badly damaged Jaguar and a red SUV.

Keith Alan was known for his sense of humor, obsession with Dalmatians and Star Trek. He was a practicing attorney who was always putting his community and family first - gone the night before his daughter's birthday.

"It sunk in that he's never gonna be there again for my birthdays," said his daughter, Naomi Alan. " He's not gonna walk me down the aisle. He's not gonna get to know his grandchildren. He's gone."

The family has started a GoFundMe page for anyone who wants to help them with funeral and medical costs.