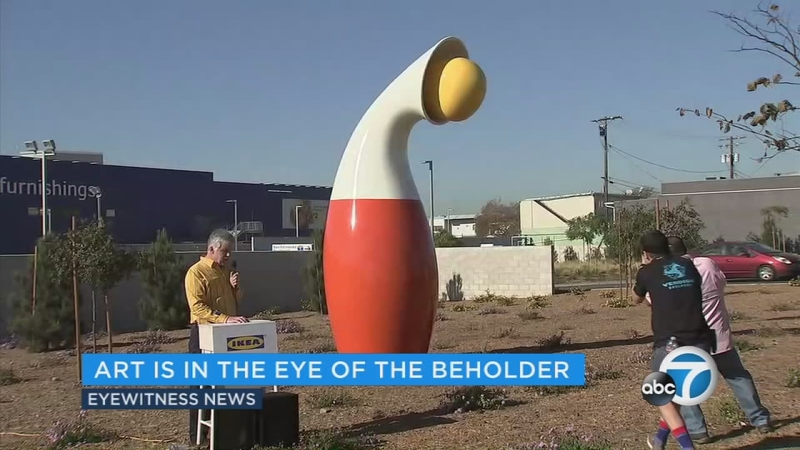 BURBANK, Calif. (KABC) -- A ceremony was held for the unveiling of an oddly shaped sculpture erected in front of an Ikea in Burbank.

The sculpture raised attention for its suggestive shape before its unveiling. From one angle the sculpture might have resembled a bowling pin bent at the top, flower vase or perhaps a squash.

From another view, some suggested it had a more anatomical appearance.

A sculpture at the Burbank Ikea is drawing attention for its suggestive shape.

Store officials said the art was inspired by floral motifs, resembling a "highly-abstract giant vase." The sculpture's head is counterweight, which allows it to move around freely in the wind.

"It appears as a large, free-standing figure, playful and open for multiple readings," said Robert Grimsley, real estate manager for Ikea U.S., adding that it's similar in its motion to toys such as the bobble head dog, which is where the name "Bobble" comes from.

The sculpture is made of fiber glass and measures 16 feet in height.

The Burbank Ikea opened earlier this year and at 456,000 square feet is the largest location in the United States for the Swedish furniture chain.