'Don't get handsy': Burger King and Wendy's are going to prom together 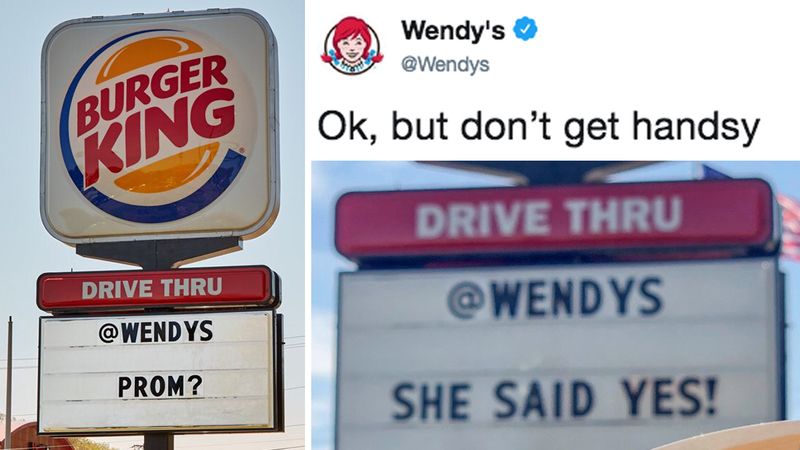 Burger King and Wendy's are going to prom together

BOSTON -- Prom season has brought together an unlikely (yet flavorful) duo: Burger King and Wendy's.

A Burger King restaurant in Boston pulled off the ultimate fast food lover's promposal this week by decking out its signboard with a message asking the neighboring Wendy's restaurant to prom.

Its pitch was short and sweet: "@Wendys Prom?"

Less than an hour later, Wendy's cordially accepted, though the freckled redhead warned Burger King "not to get handsy" and insisted that she had to be home by 10 p.m.

Ok, but don’t get handsy and we have to be home by 10. https://t.co/tQunlsqecG

In celebration of its triumph, Burger King tweeted another photo of a corsage in a Whopper box held before its sign, which had been updated with a new message: "@Wendys She said yes!"

.@wendys looking forward to it. let’s aim for king and queen of prom. 🤴👸 pic.twitter.com/KMBktLPLfl

The restaurants continued to have fun on Twitter, with Wendy's saying that a hamburger-themed dress would be perfect for the occasion and adding that it hopes McDonald's isn't at prom.

As for Burger King's attire, the eatery pledged to wear "something fancy."

One user, though, brought up the elephant in the room: aren't 48-year-old Wendy's and 64-year-old Burger King too old to go to prom?

"How dare you," Wendy's retorted.

Could this be the start of something beautiful between two of the biggest names in fast food? The beefy behemoths, both known for their quirky and occasionally snarky social media presences, have a history of getting into juicy feuds on Twitter.