Burglar seen on video in San Bernardino apartment while residents sleep nearby: 'It was horrifying' 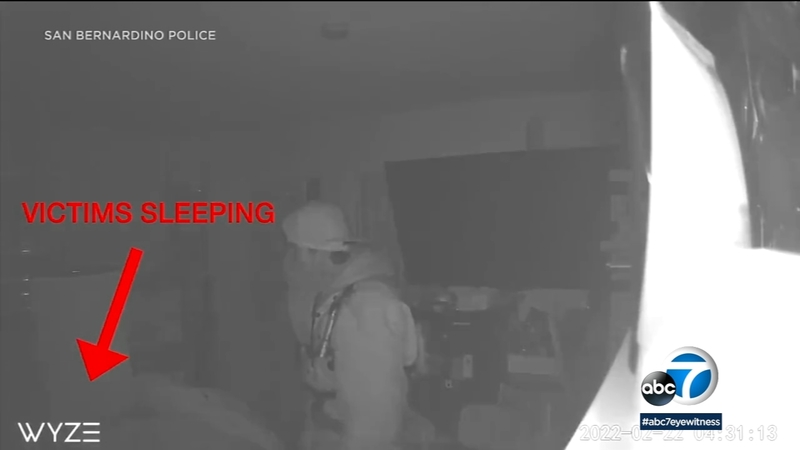 SAN BERNARDINO, Calif. (KABC) -- San Bernardino police arrested a burglary suspect who investigators said was caught on camera sneaking around inside the victims' apartment while they were sleeping.

The incident happened around 4:30 a.m. on Feb. 22 in the 1400 block of West Edgehill Road in San Bernardino, authorities said.

One of the people who was asleep at the time said she might not have even known what happened. But Rachel Sandoval said she saw the surveillance video from inside the apartment, there was no doubt as to what occurred.

"When my husband showed me the tape of him watching us sleep, it shook me to the core," said Sandoval. "It was horrifying."

Police investigators said the intruder gained access to the apartment by removing an air-conditioning unit attached to one of the windows. He entered through a room that would typically be occupied by the Sandoval's 3-year-old child who requires 24-7 assistance by a nurse.

But because the child had been sick, they were sleeping in the living room.

Ventura County man recalls taking down burglars who broke into his home: 'I went BAM with the right cross'
EMBED More News Videos

A Ventura County man refused to become a victim when two burglars broke into his Oak Park home last week, and he said he'd do it again.

"I feel like that was a good thing to happen because the guy came in through his bedroom window," Sandoval said.

Surveillance video shows the suspect leaving the apartment through the front door. But for some reason, he turned around and came back. When he tried to come back inside, the nurse woke up and confronted him at the door.

Sandoval said their nurse didn't think anything of it at the time; it wasn't until she watched the surveillance video in the morning did she realize the suspect had already been inside the apartment.

Police said DNA evidence led them to the suspect, who was later arrested.

"It's astonishing, the sheer brazenness of the suspect's actions," said San Bernardino police Sgt. Equino Thomas. "There is a possibility he has committed this crime before, we are investigating that.

"We are asking if there are victims out there who have not reported it, and they believe they have been a victim in a crime similar to this, to please reach out to investigators."