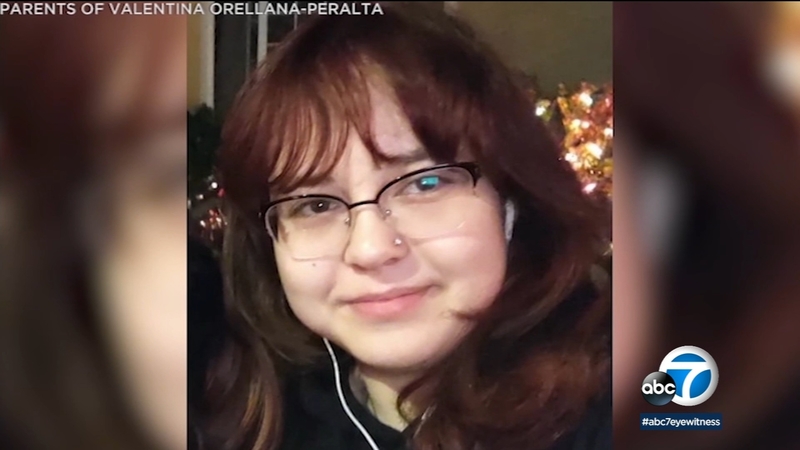 SOUTH LOS ANGELES (KABC) -- A public viewing was held in South Los Angeles on Saturday morning for 14-year-old Valentina Orellana Peralta, who was struck and killed by a stray bullet fired by a Los Angeles police officer at a North Hollywood department store on Dec. 23.

The viewing was held at Angelus Funeral Home on Crenshaw Boulevard. Orellana Peralta's funeral is scheduled for 11 a.m. Monday at City of Refuge Church in Gardena. The Rev. Al Sharpton will officiate and deliver the eulogy. Attorneys Ben Crump and Rahul Ravipudi will also speak and repeat their call for justice for Orellana Peralta, according to a joint statement.

On Saturday afternoon, a group of demonstrators marched from the Burlington store on Laurel Canyon Boulevard to the Los Angeles Police Department's North Hollywood station, demanding justice in the girl's killing.

On Thursday, Mayor Eric Garcetti said the city will "look comprehensively'' at all aspects including police training, tactics and policies in its investigation into Valentina's killing by an LAPD officer who opened fire on an assault suspect at the store.

The LAPD's Force Investigation Division and Inspector General's Office are investigating the shooting, along with the California Department of Justice's California Police Shooting Investigation Team for Southern California. The state Justice Department investigates officer shootings under provisions of a bill signed into law last year.

The parents of Valentina Orellana-Peralta, a 14-year-old girl who was fatally struck by an LAPD officer's stray bullet, spoke out at a news conference.

Once the investigation has been completed, the results will be turned over to the California Department of Justice's Special Prosecutions Section within the Criminal Law Division for independent review.

LAPD Officer William Jones, who opened fire while confronting the suspect, has been placed on administrative leave while authorities investigate the shooting. On Jan. 2, a coalition of civil rights groups called for Jones to be arrested and prosecuted for involuntary manslaughter.