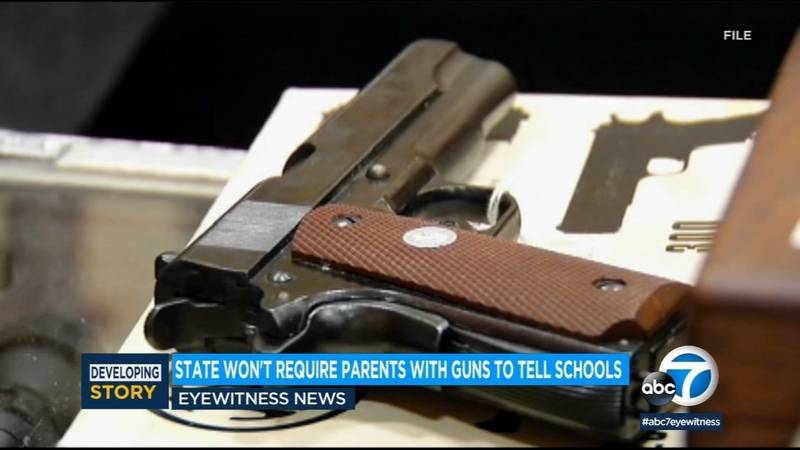 SACRAMENTO (KABC) -- California will not require parents to tell schools if they keep guns inside their house.

The bill would have required parents or guardians with a student in public or charter school to annually disclose if they have firearms at home.

The bill also would have required school officials, working with law enforcement, to search a student's on-campus property like backpacks and lockers for firearms if they learned of a credible violent threat. They would also have been required to search the student's electronic devices for clues.

"What's next, having parents report swimming pools in their backyards and prescription drugs in their medicine cabinets?" asked Roy Griffith, legislative director of the California Rifle and Pistol Association.

It died even after Democratic Sen. Anthony Portantino promised to drastically amend his bill if it survived a committee vote. He and supporters said it could help prevent mass shootings and other firearms tragedies, but only two of seven members of the panel voted for it.

"Those go so far beyond my core beliefs in civil liberties that I just can't associate an 'aye' vote," said Sen. Dave Cortese, a fellow Democrat who has pushed for many criminal justice reforms.

Among its many restrictions, California limits the size of ammunition magazines to 10 bullets, outlaws firearms that fall into its definition of assault weapons, imposes strict purchase and waiting period requirements, and requires background checks for people buying ammunition.

There are about a dozen gun bills pending in the Legislature this year, according to Gun Owners of California, most notably a measure that would let private citizens sue gun makers to stop them from selling assault weapons. A related bill also attempts to make it easier for people to sue gun companies for liability in shootings that cause injuries or death.

Another measure would require firearm dealers to have a digital video surveillance system on their business premise, while several bills would bar gun sales on government property.

Four Assembly bills are aimed at unregistered "ghost guns," including one that would restrict the use of 3D printers.

Portantino said the U.S. has had more than 1,300 school shootings since 1970, with more than 160 of them in California. He said in many cases there are warning signs, and the information required in his bill would help school and law enforcement officials prepare for and prevent shootings.

Portantino cited statistics that nearly 70% of school shootings involve a gun taken from the student's home or the home of a friend or relative. And he said that more than 90% of attacks are planned in advance and in many instances follow threatening or concerning communications.

Two Democratic senators on the seven-member committee voted to move the bill along despite what both acknowledged were needed changes.

"The status quo is unacceptable. After all these tragedies, we always say our hearts and prayers go out to those who have been hurt. And we pledge to try to do something to make it not happen again," argued Sen. Steve Glazer in emotional support.

"Even in the quiet of this hearing room I can still hear the cries of family and parents," he added. "I can see the tears flowing down their faces. I can hear their memorial prayers about a young life cut short."