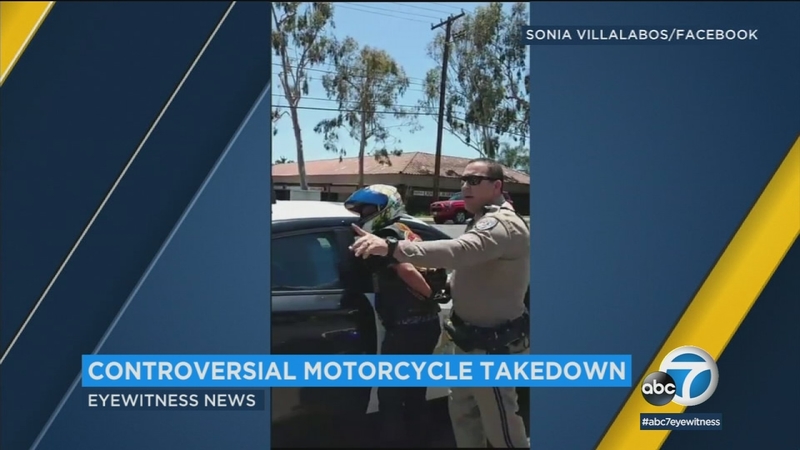 CITY OF INDUSTRY, Calif. (KABC) -- The California Highway Patrol released more information on the collision between a CHP officer and motorcycle rider that was caught on camera in Rancho Cucamonga.

A group of motorcycle riders headed out from a restaurant in the City of Industry to a fundraiser in Rancho Cucamonga on Sunday. As they were traveling on the eastbound 210 Freeway, passengers began taking videos of the ride.

During that time, the CHP said one of the motorcyclists tried to pass a car on the right shoulder as it was trying to enter the freeway near Mountain Avenue.

In a video captured by a passenger, the CHP officer turned on his lights and siren in an attempt to pull over the biker. The rider, who was identified as 26-year-old Raul Garcia, slowed down during that attempt, moved around the vehicle and sped off.

As the group exited the freeway, another passenger was on Facebook Live when the CHP officer and motorcyclist zoomed by at an intersection. In that video, it appeared the CHP officer collided with Garcia's motorcycle, sending him crashing to the ground.

The bikers became angry after witnessing the crash and confronted the officer as he was trying to take Garcia into custody. A collision report indicated that Garcia suffered bruising to his left leg, shoulder and lower back as a result of the crash.

He was also taken to a nearby hospital for evaluation before he was arrested on suspicion of felony evading and booked into the West Valley Detention Center.

The crash happened for "unknown reasons," according to the CHP, and it remained under investigation.

The witnesses at the scene said the act felt intentional.