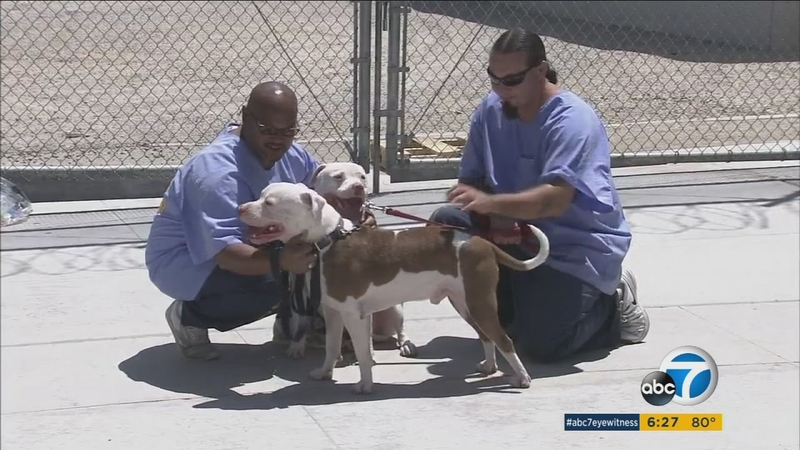 LANCASTER, Calif. (KABC) -- The California State Prison in Lancaster took in 50 animals that were evacuated from The Deaf Dog Rescue of America (DDRA) in Acton after their community was threatened by the Sand Fire.

The DDRA had an extremely hard time finding a place that would take these animals in. The prison was the only place that opened their doors.

"It was very scary. Not having a place for the dogs to go, not knowing what we were going to do, but then thank the warden for letting us come here," Mark Tipton with DDRA said.

The prison runs a program called the Paws for Life. Animals from high-kill shelters around Los Angeles are brought to the prison and paired with an inmate that trains them to increase chances of adoption.

"We are the only dog program at a maximum-security prison in the state of California," prison official Crystal Wood said.

Despite the dogs' inability to hear, the inmates have been able to train them using hand gestures for sit, stand and stay.

"Paws for Life restored my faith in humanity that I'm a person, that I matter. It gave me the opportunity to care for something, love something," inmate trainer Jon Grobman said.

The evacuated dogs will only stay at the prison for a little longer, but generally dogs in the Paw for Life program stay for a 10-week training period.

Since the program launched two years ago, 75 dogs who would have been euthanized were trained and adopted into loving families, according to the inmates.