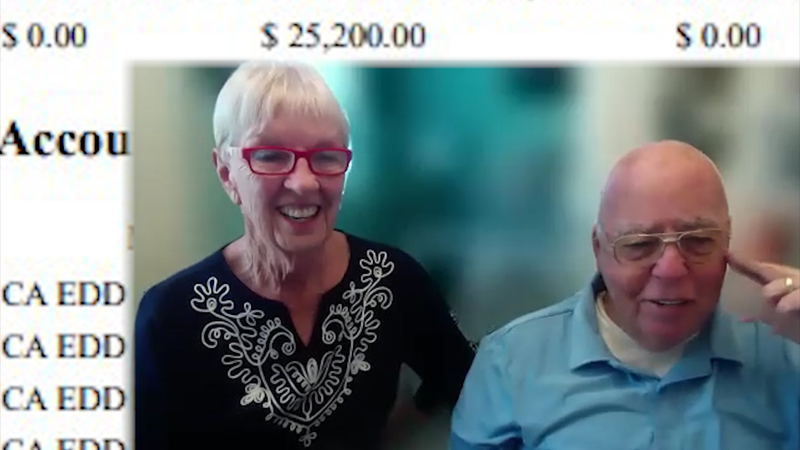 BRENTWOOD, Calif. -- The huge unemployment fraud scandal at the EDD has reached into the lives of ordinary citizens, many of whom had no idea scammers were using their stolen identities to file phony claims until they received a surprise from the EDD -- a tax form saying they owe income taxes on the benefits fraudsters claimed in their names.

Among them is a retired couple in the East Bay town of Brentwood, Frank and Linda Rezac, who find themselves battling an unresponsive bureaucracy at the EDD. The couple tried for months to warn the EDD someone was stealing unemployment benefits. Instead, the EDD kept paying the scam account.

Now the couple is saddled with the tax bill. A form 1099-G from the EDD just arrived in the mail saying they owe income taxes on a staggering amount -- $25,200 that the scammer claimed in Frank's name.

"The fact they are so unresponsive is what's angering," Frank Rezac said. "Now we have this huge cloud looming over us. Tax on that amount will be $7,000 or $8,000. A steep financial hit."

However, in their quest to get EDD to correct that 1099 saying they didn't get the money, the couple made a surprising discovery: They found the stolen EDD money that the bureaucrats failed to protect. Now they find themselves the guardians of this money -- as EDD still hasn't responded to their frequent alerts.

"It was a shock," Linda Rezac said of finding the money. "But a nice shock."

Their strange odyssey began five months ago. They were enjoying a quiet retirement in leafy Brentwood, playing golf, taking strolls, when out of the blue Frank got a notice from the EDD.

Absurdly, the notice granted Frank pandemic unemployment benefits of $167 per week, based on a salary of $80,000 per year.

"And I've been retired since 2002," Frank said. Of course he never applied for benefits. He hasn't worked in 20 years.

Immediately he wrote back to the EDD, saying he never filed for unemployment and EDD should cancel whatever claim was there.

Instead, the EDD increased his benefits. Two days later, Frank received a second notice awarding him $450 per week for 39 weeks.

"That's when I told them we never applied for unemployment," Rezac said, "thinking that would solve their problem. It didn't."

His letter to EDD said someone apparently was using his Social Security number to file a fraudulent claim. Rezac asked the EDD to investigate and report back to him.

No one ever did. Instead, the EDD ignored his warnings and sent him a debit card so he could cash in those benefits.

"It's unbelievable that a government office, department, can operate this way that they don't listen to what people are telling them," Linda Rezac said.

"We just cut up the card we didn't activate it," Frank Rezac added. They figured cutting up the card would solve the problem.

Four months later, they got that 1099-G, saying they owe those income taxes. That was the first time they realized the EDD paid $25,200 into the scammer's account.

"Now we're getting slammed with the taxes," Frank Rezac said.

The couple figured the scammer must have gotten away with the money. When they called 7 On Your Side for help, we suggested they check the account anyway.

"It was there!" Linda Rezac said.

Indeed, they found all the money sitting snug in the account -- all $25,200. What's more, the bank records show that the EDD kept depositing money into the account long after the couple reported it was a fraudulent claim.

"We were just relieved that nobody could say we took the money," said Linda.

They figured their problems were solved. They'd return the funds, the EDD could correct the 1099 and life could go back to normal.

They tried to contact EDD to take back the funds. They've not heard back. Even a state legislator's attempts to alert the agency - and those of 7 On Your Side - have been met with silence.

The EDD tells 7 On Your Side only that: "We have received your request and will get back to you."

Now the couple find themselves guarding those taxpayer dollars, worried the scammer may try to grab the money.

"We've frozen the account so no one else can use it," Frank Rezac said.

"I have the PIN and the password so it's protected," Linda assured us.

It's a job they say the EDD should be doing. A state audit in January said the EDD assigned only two staffers to respond to public reports of fraud, and alerts like those of the Rezacs went nowhere.

"I feel like we are working awfully hard to solve a problem that we didn't start," Linda Rezac added.

"All I want is a corrected 1099 that says zero, zero, zero," Frank Rezac said. Linda chimed in: "And for them to take their money back."

Have a question for Michael and the 7 On Your Side team? Fill out the form HERE! 7OYS's consumer hotline is a free consumer mediation service for those in the San Francisco Bay Area. We assist individuals with consumer-related issues; we cannot assist on cases between businesses, or cases involving family law, criminal matters, landlord/tenant disputes, labor issues, or medical issues. Please review our FAQ here. As a part of our process in assisting you, it is necessary that we contact the company / agency you are writing about. If you do not wish us to contact them, please let us know right away, as it will affect our ability to work on your case. Due to the high volume of emails we receive, please allow 3-5 business days for a response.