Cameron Terrell, who was acquitted in a gang murder, is released from custody in new carjacking case 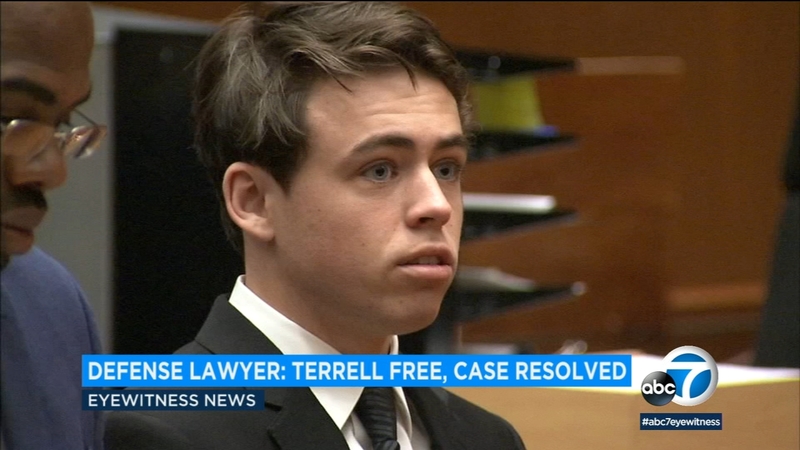 LOS ANGELES (KABC) -- Cameron Terrell, the Palos Verdes teenager who was acquitted in a gang shooting last year, has been released from custody after being charged in a second crime.

Terrell was arrested last month and awaiting trial on two charges of armed carjacking and robbery that happened when he was still 18 years old. Custody records show Terrell was released to probation.

Details on how his case was resolved are sparse because the matter was handled in juvenile court, which keeps records confidential.

Last year, before Terrell was tried as the getaway driver in a gang murder, the prosecutor disclosed that there had been an earlier carjacking in San Pedro in which a suspect said he was helped by a white teen with a "W" tattooed on his chest.

Cameron Terrell, 18, was also acquitted of two counts of attempted murder involving two other men who were not injured in the October 2017 fatal shooting of 21-year-old Justin Holmes, an innocent pedestrian.

Evidence at trial included Terrell's "W" tattoo, as well as video footage of him picking up two teens after the fatal shooting of 21-year-old Justin Holmes.

The jury found Terrell not guilty of Holmes murder.

About the recent arrest, Blacknell said, "the case has been resolved. Cameron is back home, planning to continue with his college education." Blacknell also said Terrell would not be returning to the University of Houston this semester due to this recent legal matter.

The two teenagers allegedly involved in the original murder of Justin Holmes have not been tried yet. Prosecutors want to try them as adults.