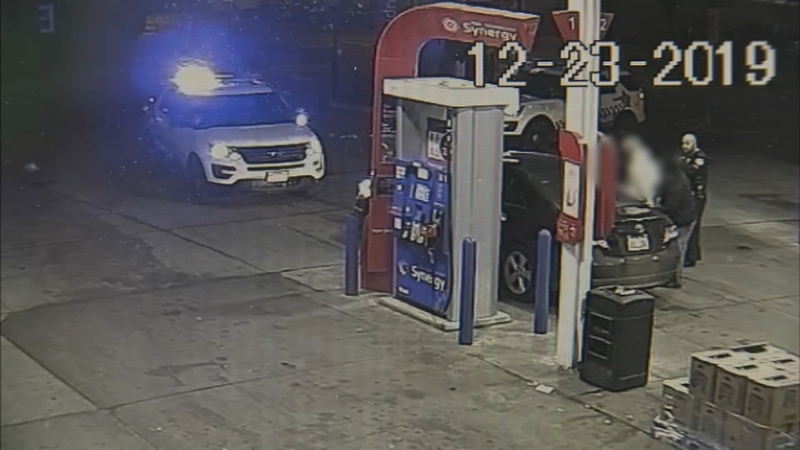 CHICAGO -- A Chicago teenager said her survival instincts took over when she and her younger siblings fought off a carjacker who stole their family's vehicle and allegedly threatened to shoot them if they refused to get out.

The children were eventually found safe and reunited with their family.

It happened after a 49-year-old man left his 2018 Toyota Highlander running around 11 p.m. to pick up food from a Domino's Pizza, police said.

Inside the vehicle were his three children, two daughters, ages five and 16, and his 10-year-old son, police said.

Two suspects drove up in a 2011 black Toyota Camry when the passenger got out of the Camry and got inside the Highlander and fled with the kids still inside, police said.

One of the children, 16-year-old Imama, said she was just about to fall asleep when a stranger got into the driver's seat.

"This dude just jumps in the car and he looks back and I realize it's not my dad, so I go, 'Who are you?!'" she recalled. "And he starts driving really fast, going in like a zig-zag pattern."

According to police, the Camry was possibly stolen earlier in the day.

Imama said she panicked, but acted quickly.
"I started yelling, I'm like 'Who are you?!' And he goes, 'Get out or I'm going to shoot you,'" she said.

Despite that, she knew she had to fight for her and her family's lives.

"I was just scared for my life, I didn't know what to do," Imama said. "I was in panic mode, like, I wanted to cry but I knew I had to do something that can help."

So she kept screaming, which woke up her 10-year-old brother Hasnain.

"I said, 'I'll get out, fine,' and then I started hitting him with the iPad," Hasnain said.

Together the siblings fought the thief as best they could from the backseat of the Highlander.
"My phone was dead so I couldn't call 911," Imama said. "I see my dad's phone in the passenger seat so I, like, try to strangle the dude from the back because I was right behind him."

As she tried to restrain the car thief behind the wheel, Imama called 911. She said that's when he jumped out of the car and into another vehicle with other people inside.

Police said he abandoned the SUV with the kids inside. The suspect was picked up by his accomplices in the Camry, police said.

The stolen Camry was located at a gas station at about 1:40 a.m. Four people in the car were taken into custody while the driver fled from the scene, police said.