The suspects in an attempted robbery escaped the scene in another stolen car.
KABC
By Eric Resendiz 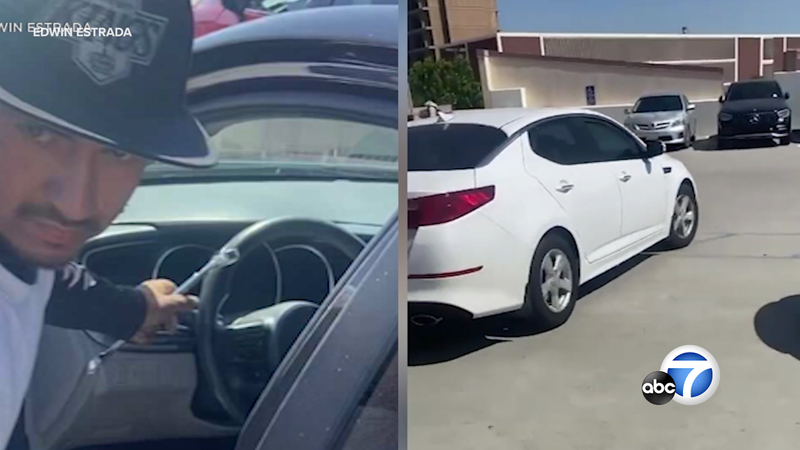 EL SERENO, LOS ANGELES (KABC) -- Cell phone video showed a man caught in the act accused of breaking into a black Kia in a Cal State L.A. parking structure. According to campus public safety, it happened on Wednesday around 3 p.m. The person who recorded the act was a student, Edwin Estrada, and is the owner of the black vehicle.

"He had a metal piece in his hand. So I didn't want to put myself in danger. So, I just like stepped away," said Estrada. "They jammed my ignition and my outside door was damaged as well, which I had to pay $400 to fix."

According to school safety officials, the suspect left the scene in the white Kia shown in the video, but that car doesn't belong to the suspect. Officials said the white vehicle was also stolen from campus. The owner of the white car is also a student who lives on campus but wanted to remain anonymous due to safety concerns.

"It's kind of scary to know that can happen just anywhere. Because I feel like on a college campus you're supposed to feel like, especially if you're living there like that's your second home. That's the place where you are supposed to feel comfortable," said the student.

According to the university, there's been a recent rise in car thefts and attempted thefts on campus, which reflects a trend in Los Angeles County involving certain Kias and Hyundais. In part of a statement, the university said, "Safety is a priority of our university. Our department of public safety is increasing patrols in parking lots..."

"You're paying so much money to the school to provide that safety in that structure and they weren't able to provide it," said Estrada.

Campus safety said no arrests have been made. They are looking for a male in his early twenties with a green tattoo on his right wrist. There's also a second suspect they're looking for but don't have a description. As for the white Kia, it hasn't been recovered. Anyone with information is urged to contact the school police.

Estrada and the other student started Gofundme pages to help pay for costs like repairs.

The Cal State LA Department of Public Safety is actively investigating these crimes and is collaborating with other law enforcement agencies. Because our Department of Public Safety is still investigating, a police report is not available. However, on April 14, the department emailed a crime bulletin to our university community. The bulletin described the incidents that occurred, provided a description of a suspect and a photo, and offered safety tips.

We regret that these incidents happened on our campus and to members of our community. Members of our CARE Team are reaching out to the impacted students to provide them with support. Any student who has been the victim of a crime may contact the Office of the Dean of Students for assistance at deanofstudents@calstatela.edu or 323-343-3103.