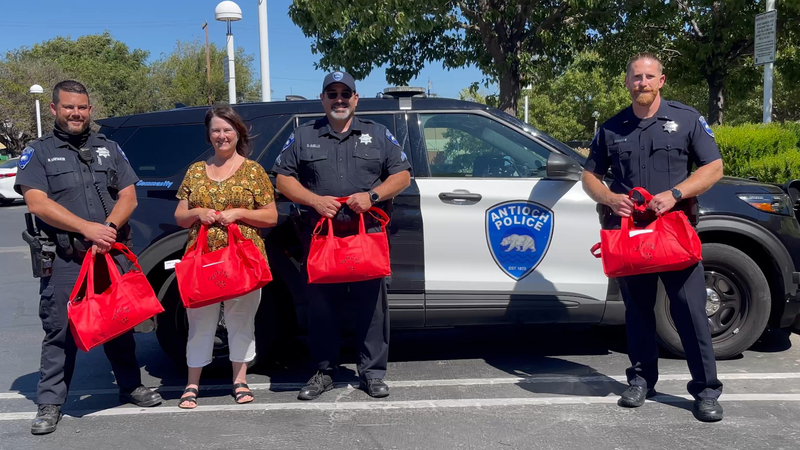 ANTIOCH; Calif. -- An Antioch resident is donating care packages to the Antioch Police Department in hopes that on-duty officers will give them to children in need.

For almost two years, Allison Norris has donated over 100 care packages known as, "Snug as a Bug" bags, to local foster care agencies, and other causes.

Over two decades ago, Norris suffered from a stroke which left her with limited use in her right hand.

After her stroke, she decided to volunteer her time at local schools and that is when she was inspired to make her "Snug as a Bug" bags.

All of the bags are decorated with Norris' favorite insect, ladybugs.

"I volunteer at two schools and one of the schools I volunteer at, many of the children are foster care kids," said Allison Norris. "A couple of the kids said they were cold at night and it just made me feel so sad. And you kind of feel helpless."

After that conversation, Norris decided to teach herself how to sew and started making rag quilts. She started to fill duffle bags with fun items for the children to call their own.

"I kind of just broke it down and thought, this is something simple that I can do," said Norris. "That can make a little bit of a difference."

After noticing the political divide in the news, Norris wanted to find a way to bridge people in her community together.

"It just stirs up a lot of emotions in you," said Norris. "I try to look at things from other peoples' perspectives and in our own city we have had a few of our own struggles. I thought, what can I do for my community?"

With the permission from the police department, Norris began donating her bags to on-duty officers to giveaway to children.

"Most of the situations where we would give these bags out is going to be a negative situation for the child," said Lieutenant Meads of the Antioch Police Department. "That can be a custody dispute with their parents or sometimes they are in living situations that are so bad that we actually have to remove them from the home."

In 2021, Norris has donated over thirty bags to the Antioch Police Department.

"I just thought it was a great idea to have someone in our community that is willing to put all their time and effort into these bags," said Lieutenant Meads. "Now more than ever it allows us to get out there and develop a relationship with these members of our community and often times the younger members."

Norris has received small donations from supportive friends and family members, but pays for the majority of the bags out of her own pocket.

She hopes to continue donating her "Snug as a Bug" bags to the Antioch Police Department to unite her community.

"It was just a way for me to bridge, supporting our community and supporting our police department," said Norris. "I feel good that they are actually going into a car and the police officer is handing them out."