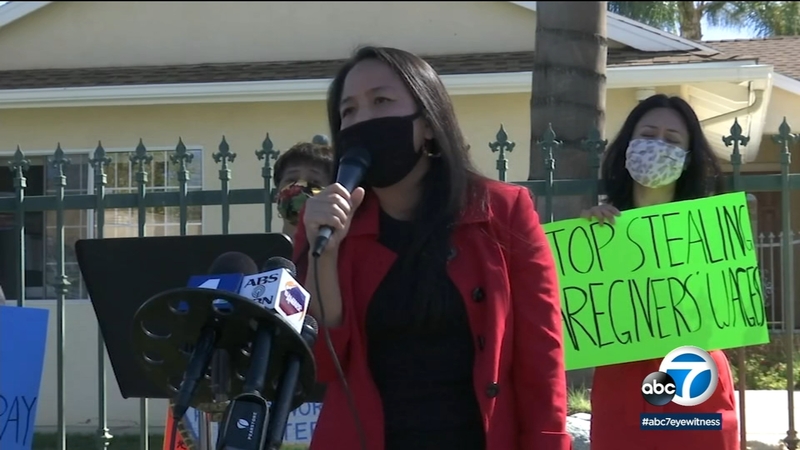 California caregivers are owed more than $8 million in unpaid wages

WEST HILLS, LOS ANGELES (KABC) -- Dozens of residential care workers are owed millions in unpaid wages and damages, according to the California labor commissioner. Some of the workers say they were paid as little as $2.40 an hour.

Care workers who worked at former residential care facility, Adat Shalom Board and Care Inc. in West Hills described being overworked and underpaid.

"I worked as a live-in worker. This means I have to work for 24 hours taking care of five elderly patients," said former employee Merril Aquino.

Wednesday, some former workers, alongside the Pilipino Workers Center, rallied outside the facility now operated by a different owner and under a new name.

"What was not acceptable was to be paid only a little over $2 an hour," Aquino said.

A hearing officer just upheld a 2018 ruling by the California Labor Commissioner. The decision states the owner of the former facility Angelica Reingold and Adat Shalom owe more than $8.5 million in violations, most of that to 148 workers for unpaid wages, overtime, and damages.

The citations were to compensate the workers who cared for elderly residents 24 hours a day, six day a week, yet were only paid for six hours each day, the state's Department of Industrial relations said in a statement.

"We are going to be launching today, a public campaign to continue until the workers are paid what they are owed." said Pilipino Workers Center Executive Director, Aquilina Soriano Versoza.

Most of the former workers are Filipino immigrants.

"There is no doubt in anyone's mind that a Adat Shalom and Angelica owe these workers wages and the workers have been more than patient and now we call on Angelica and Adat Shalom to pay the workers what they're owed," said Bet Tzedek attorney, Yvonne Medrano.

The former owner could appeal the latest decision, and then it would go to a civil court judge for review. To do so, a bond of more than $6 million would first have to be paid.

ABC7 tried reaching Reingold at available phone numbers and tried calling her possible representatives but have not heard back yet.