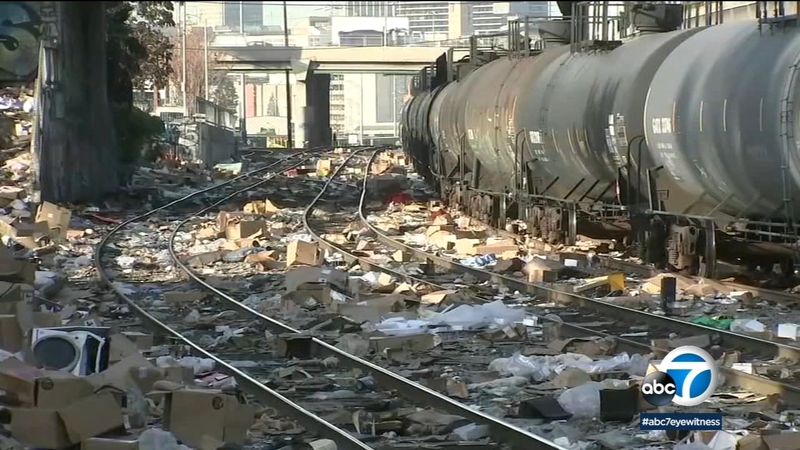 LOS ANGELES (KABC) -- Photos and videos showing piles of empty boxes littered alongside rail tracks in Los Angeles County have gone viral as shipping companies say they've seen a dramatic spike in railroad theft. Some of the boxes are packages from companies like UPS, Amazon and FedEx.

Union Pacific, one of the country's largest railroad companies, says it may avoid operating in L.A. County following the spike in thefts, which it blames on lax prosecution of crimes. The containers and trains are locked, but can be broken into.

Joseph Prichard, who lives in Lincoln Heights, and says he sees people breaking into the cargo about once a week.

"Just in the last couple of months we've noticed several times when people were jumping over the tracks and taking packages right off the train," he said. "They throw it over and there's usually someone else loading it up on a car. Sometimes they open the boxes right there on the sidewalk to see what's inside, take what they want and leave the rest there."

"All throughout the day, through the night, 24/7. Like we're right here right now, and maybe a mile down they're breaking into more containers. They don't care if the train's moving or not," he said.

The rest is mostly empty boxes, bags and lots of COVID-19 test kits.

"Those obviously they didn't want. They want like the electronics and expensive clothing and purses," Rodriguez added.

Union Pacific has dealt with this problem in the past and has cleaned up accordingly, as they did this week.

The locks protecting the cargo are clearly easy enough to break into. However, Union Pacific believes the justice system is too easy for criminals.

The company sent a letter to L.A. County District Attorney George Gascón in December stating that it saw a 160% year-over-year increase in theft in the county. The letter also explained how a 2020 special directive made certain misdemeanors, like trespassing, less severe.

In a statement to ABC7, a spokesperson with Union Pacific added: "While we understand the well-intended social justice goals of his special directive, we need the justice system in L.A. County to support law enforcement efforts to hold criminals accountable, while protecting Union Pacific employees and the supply chain."

Union Pacific says officers patrolling the area have arrested more than 100 people in the past few months but have not once been contacted for any court proceedings.

A spokesperson with the district attorney's office told ABC7 that it takes Union Pacific's concerns seriously, and that some cases have been filed like burglary and grand theft, while others were declined with not enough evidence.