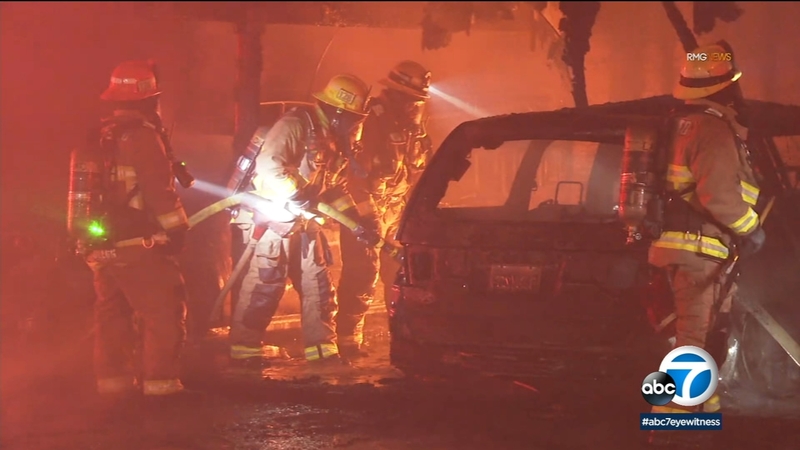 SANTA CLARITA, Calif. (KABC) -- More than a dozen cars were damaged or destroyed in an overnight fire that ripped through a carport in Santa Clarita, and arson investigators were trying to determine a cause.

The fire was reported just before 2 a.m. Thursday at an apartment complex parking lot on Camp Plenty Road off of Soledad Canyon Road, according to the Los Angeles County Fire Department. At least 16 cars were burned to some degree, but no injuries were reported.

The carport structure is made of wood, which allowed the fire to quickly spread before it was extinguished.

Residents in the apartment complex woke up to some explosions and found the flames tearing through their vehicles.

For one man, the truck he lost was much more than just a truck.

"This particular truck... my daughter passed away and this was her truck. I'm just attached to it and it's gone," said Antonio Castillo.

Resident Jose Gutierrez left to work around 10 p.m. Wednesday and smelled something.

"I hopped into my car and I had a faint smell of just an electrical little fire.. little bit of a smoke smell... checked around, wasn't in my car but didn't think much of it. People were jus walking around, minding their own business," he said.

Gutierrez returned home early Thursday morning and found that one of his two cars was lost in the fire.

A cause for the fire has not been determined, but fire officials told Eyewitness News it may have been some sort of mechanical failure.