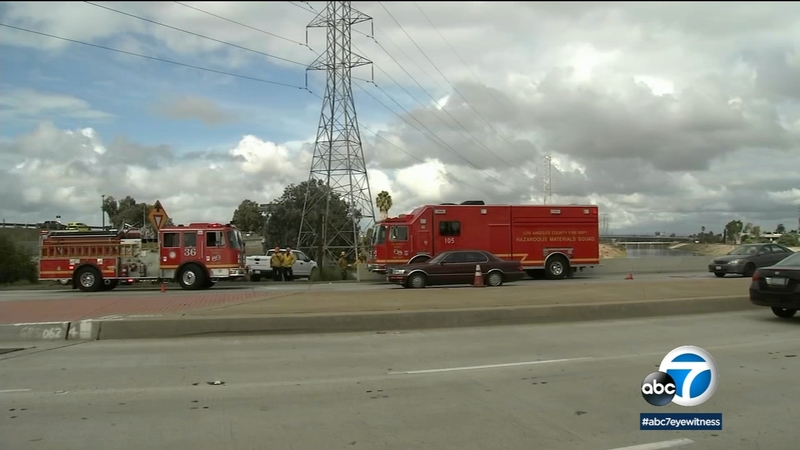 CARSON, Calif. (KABC) -- Some Carson residents have been smelling something strange in the Dominguez Channel, which bisects the city from the interchange of the 405 and 110 Freeways to Pacific Coast Highway.

Multiple agencies say they are investigating the foul odor.

The smell -- which some have described as a combination of "The Walking Dead," rotten eggs and burning tires -- remained unmistakably detectable on Friday morning.

A Los Angeles County Fire Department hazardous materials team was seen near the channel, investigating what an agency spokesperson said was an "unknown odor" emanating from the waterway.

The spokesperson said investigators have not found any evidence that the unpleasant smell is caused by something particularly dangerous or an emergency.

It is, however, at best uncomfortable for people who live in the Carson area and have experienced the relentless odor since Monday. Some have told ABC7 that they suffered nausea and other symptoms as a result.

"I lost my appetite. It's giving me bad headaches," said a resident named Twila, who declined to give her last name. She mimicked a gagging sound while describing the reaction of herself and her coworkers. "It's bad," she said.

After nearly six years of litigation, SoCalGas and its parent company will pay up to $1.8 billion to settle claims of more than 35,000 victims of the 2015 Aliso Canyon natural gas storage facility blowout near Porter Ranch.

"According to the security personnel at the Marathon refinery, the fenceline readers are reading normal and no special processing is currently occurring at refinery," the South Coast Air Quality Management District, which is also investigating the matter, said in a Thursday statement.