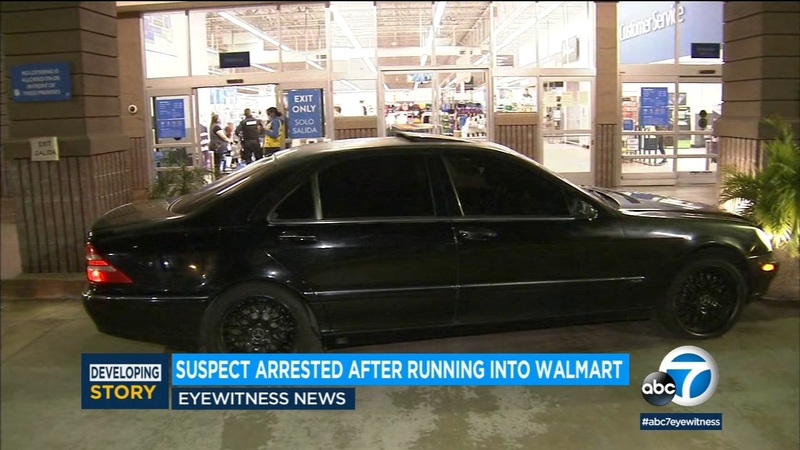 WESTMINSTER, Calif. (KABC) -- A suspect ran inside a Walmart in Westminster in an attempt to escape law enforcement after a chase that started in Riverside Monday night.

The driver, who Riverside police said changed clothes while inside the Walmart, was taken into custody after running out of the store.

AIR7 HD was over the chase at around 10:40 p.m. as the suspect driving a Mercedes-Benz was traveling on the 91 Freeway.

The driver exited onto Beach Boulevard in Buena Park a short time later and made a U-turn at Orangethorpe Avenue and traveled southbound on Beach Boulevard through Anaheim and into Westminster.

At one point in the chase, the suspect stopped to let a passenger exit the vehicle and continued driving on surface streets.

The driver pulled into the parking lot of the Westminster Gateway Shopping Center on Beach Boulevard just after 11 p.m. and drove onto the sidewalk outside a Walmart where he ditched the car and ran inside as the car crashed head-on into a row of plants near the entrance of the store, narrowly missing at least two customers exiting the business.

A suspect ran inside a Walmart in Westminster in an attempt to escape law enforcement after a chase through Orange County Monday night.

A perimeter was set up to search for the suspect.

It appeared customers were still shopping at the time when the suspect ran in.

At about 11:10 p.m., authorities located the suspect near Beach Boulevard and Trask Avenue and took him into custody.

The suspect was originally wanted for failure to yield. Riverside police said the passenger was also taken into custody.