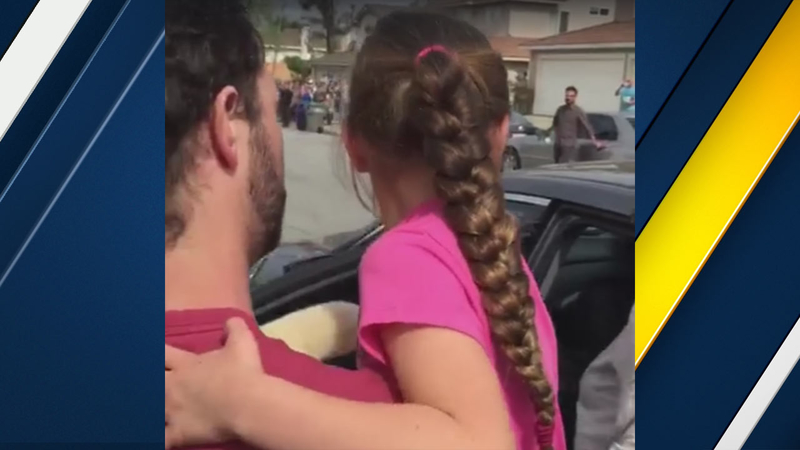 SANTA CLARITA, Calif. (KABC) -- A part-Choctaw girl was removed from her foster home in Santa Clarita on Monday to be sent to live with extended family in Utah.

It was a powerful and moving moment as 6-year-old Lexi was seen pleading for her foster father as she was taken away by a Los Angeles County Department of Children and Family Services agent.

Rusty Page, the man Lexi has known as her only father for most of her young life, said his little girl called him her "Superman" and begged to him saying, "Don't let them take me away."

Rusty and Summer Page took in Lexi four years ago to live with them and their three children and want to adopt her. The girl knows the Pages as her mother and father.

However, Lexi will be sent to live with extended family members in Utah because she is 1.5 percent Choctaw.

The girl's case falls under the Indian Child Welfare Act, a federal law passed in the 1970s aimed to protect the best interests of Native American children.

The Page family has made a plea to let Lexi stay with them at least until they can take the case to the California Supreme Court to file a stay of the removal order, which they planned on doing Monday.

Rusty said Lexi "will come home," but not on the accord of Child Protective Services.

"At the end of the day, if I can't understand why they would take her, I can't explain it to my kids," said Rusty Page.

Lexi was supposed to be taken away on Sunday, but DCFS postponed the meeting after a large group of supporters crowded the neighborhood to stand against her removal. The crowd stayed overnight, sleeping in bags in driveways in the cold to show their support.

"People don't sleep on the streets in the middle of the night for nothing. People do that when something's wrong and when something is not just," said one supporter.

Another supporter said Lexi's case represents how broken the system is.

The Pages have been embroiled in the custody battle over Lexi for years. Last Friday, they lost their appeal to keep her.

"Quite frankly, when Lexi is old enough to understand what happened to her, I think that would lead to resentment of her heritage, not embracing of the culture," Rusty Page said.

The court decided Lexi will be sent to go live with extend family in Utah, where her family members have been fighting for her for the last three years. They've also made monthly visits to see her.

"The injustice here is not that she is leaving California but rather that her foster parents pursued litigation which prevented her from joining her family sooner," said Lexi's court appointed lawyer in a statement.

But to Rusty Page, the man Lexi has called dad for the last four years, he says he still has hope they can win their fight to keep Lexi.

The Pages said they initially did not tell their children about Lexi's situation because the court was preventing them.