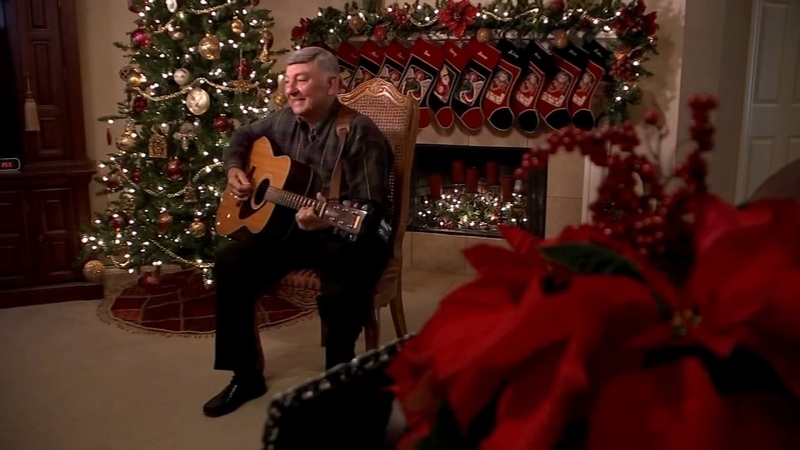 Johnny Gondesen of Texas wanted to get his song called "Christmas Is Here" on the radio, and as of Wednesday morning, it came true after a local radio show aired it.

ABC13 first talked to Gondesen about this wish years in the making back in November.

He explained he grew up playing guitar, and singing in a Galveston country western band as a young man.

Later he married his high school sweetheart, and they had a family.

"We'd drive to Houston for Christmas shopping, and there were tree lots along the Gulf Freeway. The kids would cry 'ho-ho-ho' when they saw the Christmas trees. I said, 'Ho-ho-ho. What can I do with that?'"

What he did was write the song, adding a 'hee-hee-hee', and the lyrics that described the joy of Christmas, with Santa coming down the chimney. His son, Johnny Jr. said the song is nostalgic and speaks of another time, and sparks memories.

Gondesen recorded the song with the assistance of his band partners.

It was turned into a 45 record, and he hoped it would get play on radio stations, but that didn't happen.

He gave away copies of the song. "I would ask people if they had young children. They told me their kids loved it."

More recently, his family produced a video that was posted to YouTube, with Johnny in the Santa suit he's worn each Christmas for years.

In the video he was dancing to "Christmas Is Here." His grandchildren held up an appeal on a poster board, reading 'make our grandfather famous,' urging them to download the music.

"It's innocent, and it's a simple song kids love." Johnny Jr. said about what he regards as a Christmas classic. "Why not when I flip on Spotify and hit my Christmas playlist have his song come up right next to Bing Crosby?"

Gondesen received a copyright for the song a few years ago, but getting it some airplay is not about royalties and profits. "It's a song that makes children happy, reminds us of a simpler time, about the joy of the season," he said. "I want them to experience that."

He already has a great grandchild, with another on the way, so that would make the fourth generation of his family to have the song as a holiday tradition.

So how do you hear this great song? Listen to Christmas Is Here on YouTube.