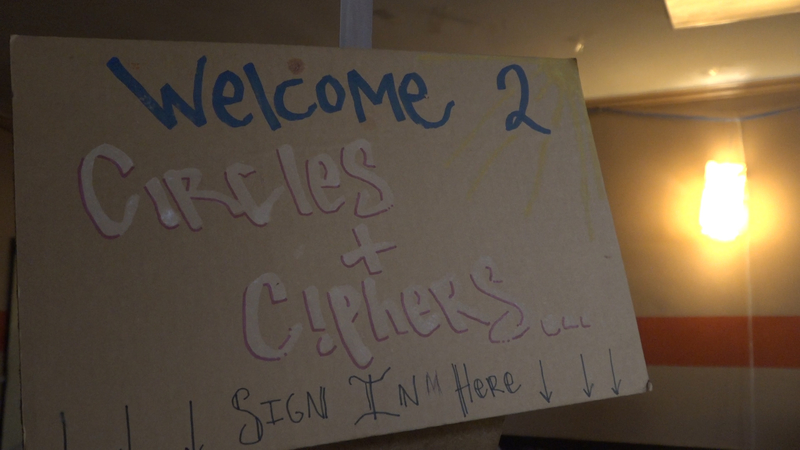 CHICAGO -- Circles and Ciphers started as a group of young men and two mentors going out for pizza. Since then, it's transformed into a safe space where young people have a voice.


That's where the peace circles come in.

A peace circle is defined as a group of three or more, where people address conflict holistically and solve problems. In essence, people talk through whatever issues they have in a group setting.

Circles & Ciphers is made of four main peace circles: Young Men's Circle, Women of Color Circle, Freestyle Circle, and the Community Circle.
"This idea of being able to sit in a space and be uncomfortable and be vulnerable and share stories with each other," Andre said. "That's where communities begin to be built and listening really happens."

"It's a community that welcomes everybody regardless of their flaws. We work towards becoming our best selves," member Marily Barnes said. "We're not necessarily talking to one person in the group, we're talking to the circle. That means a lot because we just get to let it all out there."

In some circles, members even rap about the problems and issues they face - hence the name.

"What we've found is there's a lot of healing that happens. Through the process of being blunt and sharing stories and listening in this deep way," Andre said.


And even though they're headquartered in Rogers Park, their impact goes far beyond it.

Akeem Soyan's been a member of Circles & Ciphers for more than three years. As a Circle Keeper, he has the opportunity to lead circles in local juvenile detention centers.

"It's crazy. We get to see these kinds of patinas that you've created or society's created in your head about people who are locked up. And when you sit down and talk, all those walls come down," Soyan said.

The lessons people have learned in the circle are enough to last a lifetime.

"It makes me understand that everyone's different and everyone may be a different person but at the end of the day we're all human beings," member Chris Gallan Guerrero said. "We have to respect each other for who we are and who we're meant to be."