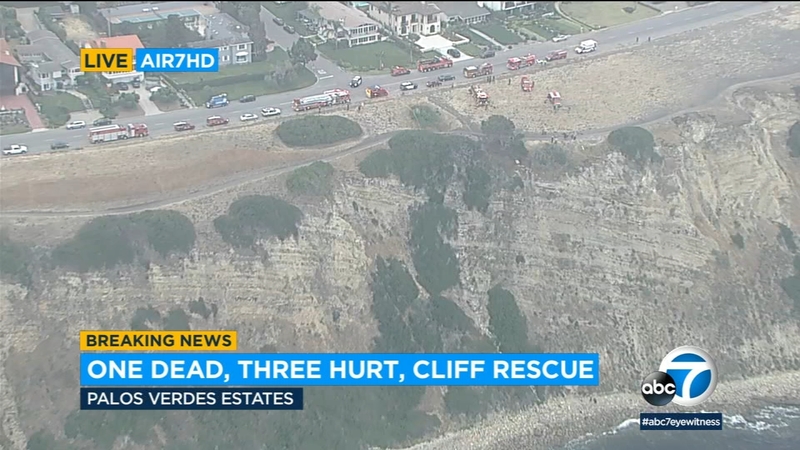 PALOS VERDES ESTATES, Calif. (KABC) -- A man was killed and three other people were injured after they fell down a cliff in the Palos Verdes Estates area Monday morning, prompting a large rescue response.

The incident was reported around 4:30 a.m. near Paseo Del Mar, according to the Los Angeles Fire Department, which added that two men and two women fell some 300 feet over the side of the cliff.

When crews arrived, Capt. Burton Kelsey said two victims were in critical condition, including the man who was declared dead at the scene.

One person had "self-extricated" themselves and was taken to a hospital. The other two injured were also transported for treatment.

Palos Verdes Estates police Cpt. Steve Barber said the four people fell over the cliff when a woman got "a little too close" to the edge of the cliff and slipped.

Her friends tried to save her from falling, Barber added.

"Unfortunately, all four of them ended up going over together," Barber said.

Barber said the group was there hanging out at the cliff's edge.

One hiker said the trail at the top of the cliff is near the edge and could be dangerous.

"You have to keep your mind about what you're doing and how you're moving...," said Rakesh Sharma. "You have to be careful, but if you're not from this area and you think you can goof around on the trail, no, that's risky business."