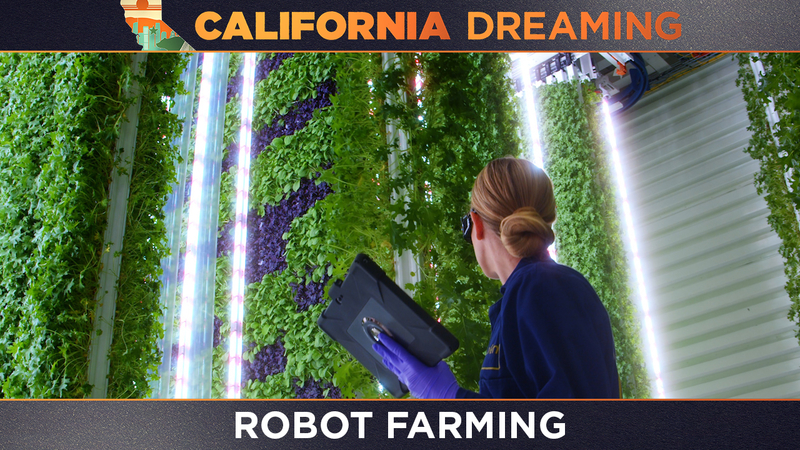 SALINAS, Calif. -- If you look at your plate, chances are what you are eating comes from California.

The Golden State is the sole producer of crops like garlic, olives, peaches and almonds and the leading producer of strawberries, lettuce and grapes for wine.

But many of these crops are being threatened by climate change and rising temperatures.

RELATED: Farmers, scientists sustainably getting by with less water

"In the Salinas Valley, a lot of our crops are extremely heat sensitive like lettuces, leafy greens and some berries. If we start seeing changes in spikes of heat or spikes of frost, we're going to see problems in being able to produce some of these crops," said Norm Groot, executive director of the Monterey County Farm Bureau.

A 2017 report by the California Public Utilities Commission indicated that cities like Fresno, which historically had four days with temperatures above 106 degrees could see an average of 22 such days per year by 2050.

In the 1950s, cotton was one of California's leading crops, with yields bigger than what was being produced by plantations in the Deep South. But drought and pests have caused cotton yields to drop. Farmers have begun moving away from cotton production, which fell 28% last year from the previous year.

In the Salinas Valley, farmers have already switched to computerized systems that use less water to irrigate plants.

"We are very concerned about the type of precipitation that California gets and the type of crops that we will be able to grow. Over 73% of our crops are grown using micro-irrigation," said Groot.

Indoor food has significant potential to be more environmentally sustainable and cut water use by about 90%," said said Gail Taylor, chair of the Plant Sciences Department at UC Davis.

RELATED: Golden State's economy expected to recover faster than the US post-pandemic

One company already doing this is Plenty, which grows leafy greens in South San Francisco, an industrial area populated by biotech firms.

"Our technology allows us to use just a fraction of the water and we use LED lights to deliver precise lighting recipes and enhance the flavor of the plants that we grow," said Shireen Santosham, head of strategic initiatives at Plenty.

The farm looks more like a high-tech manufacturing space. Robots grab seedlings from big tables and transplant them into a large tower that gets hung vertically in a giant grow room. The leafy greens can be harvested every ten days year-round.

"We use 1% of the land of traditional farming and we also save a huge amount of water," said Santosham.

The South San Francisco plant uses 100% renewable energy to power its LED lights. Plenty is building a larger indoor farm in Compton that will supply leafy greens to over 400 grocery stores across California.

It's also looking into creating a similar grow environment for other crops, like strawberries.

"Suddenly we can control the environment in ways we never thought possible," said Taylor. "Part of the bigger mission of the University of California is to breed resilient crops for the future, crops that can tolerate higher temperatures and crops that don't need so many chilling days in the winter."

Technology and artificial intelligence is already making an impact in the fields of Salinas.

For the past year, FarmWise has been using robotic tractors to pick weeds around crops like cauliflower and romaine lettuce. Cameras underneath the tractors are able to identify the vegetables and cut out weeds that take up water from the spoil.

Engineers are able to monitor the robotic tractors and make adjustments from the company's San Francisco headquarters.

"It's kind of a clash of two worlds. It's a clash of farmers and ranchers and technology and engineers. We're all coming together to help better understand how to grow and how to grow in the future," said Espinoza.

Our special docuseries "California Dreaming" explores the challenges, solutions and people striving to keep the Golden State great, and the California Dream alive. Download our app on Roku, AppleTV, FireTV or AndroidTV to watch the special now on your TV!