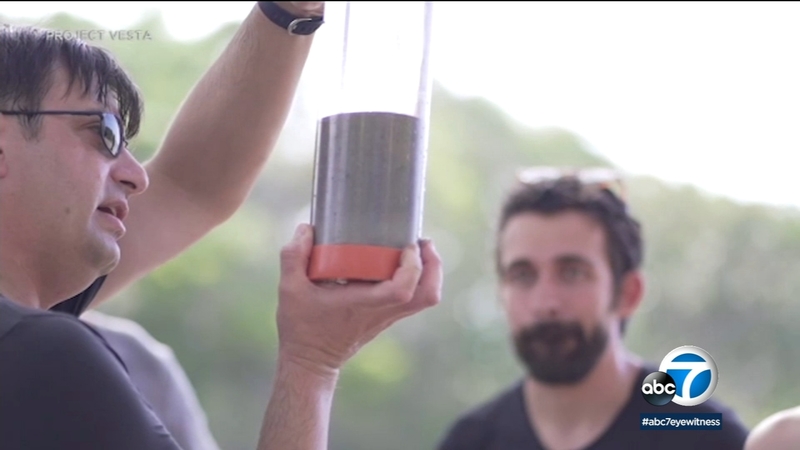 SAN FRANCISCO (KABC) -- In the battle against climate change, a San Francisco nonprofit has developed a cutting-edge technology that uses olivine sand to remove carbon dioxide from the atmosphere.

Carbon dioxide emissions of all human activity around the world has surpassed 40 billion tons per year.

Governments are now encouraging, and in some cases, requiring improvements, but those efforts are about reduction. What about removing excess carbon dioxide?

"The problem that we've caused here is we've taken carbon out of geological storage in the form of fossil fuels and put it in the atmosphere, so we need geological ways to put it back and do so permanently," said Tom Green, the executive director of Project Vesta, a San Francisco-based nonprofit that hopes to further the science of coastal carbon capture.

The group hopes to use Earth's natural process for keeping carbon dioxide in balance as a permanent, scalable solution for climate change.

How exactly does this work?

Let's start with a recent lava flow in Spain. As it cools, volcanic rock forms. When it comes in contact with rain, it removes carbon dioxide from the atmosphere.

"If it weren't for this process, the long-term carbon cycle or the weathering process, Earth would look and feel like Venus," explained Kelly Erhart, the co-founder and director of development for Project Vesta. "So this process has regulated carbon levels on planet Earth for billions of years, and what we're trying to do is accelerate it."

Rising sea levels caused by climate change could leave beloved seaside landmarks like the Santa Monica Pier submerged underwater within the next century.

Project Vesta will do that by grinding olivine into sand and mixing it into the sand on an isolated beach in the Caribbean as part of a pilot project.

Olivine is a mineral common in Earth's subsurface that weathers quickly at the surface and over time, dissolves in the seawater, taking carbon dioxide out of the atmosphere.

"It's incredibly exciting. It's kind of the cutting edge of ocean geochemistry, and what's possible when we do partner with nature," said Erhart.

The science has been tested in labs for more than 30 years and there's little concern about a negative environmental impact when olivine is added.

Primarily because there are beaches around the world, like one in Hawaii that consists of Olivine sand.

Even still, the immediate plan is for a gradual approach to scaling up and working with local communities in the Caribbean to ensure no harm is done.

"We're really excited to have this potential to actually empower coastal communities to increase their level of resilience to climate change, while at the same time removing carbon dioxide from the atmosphere for the whole planet," says Green of the pilot project.

If Project Vesta is successful, for every ton of olivine sand used, one ton of carbon dioxide would be removed from the atmosphere.

Ultimately, this could be done around the world.

Imagine, instead of simply moving sand on beaches for coastal nourishment projects or protection from storm surge, Olivine is mixed with existing sand.