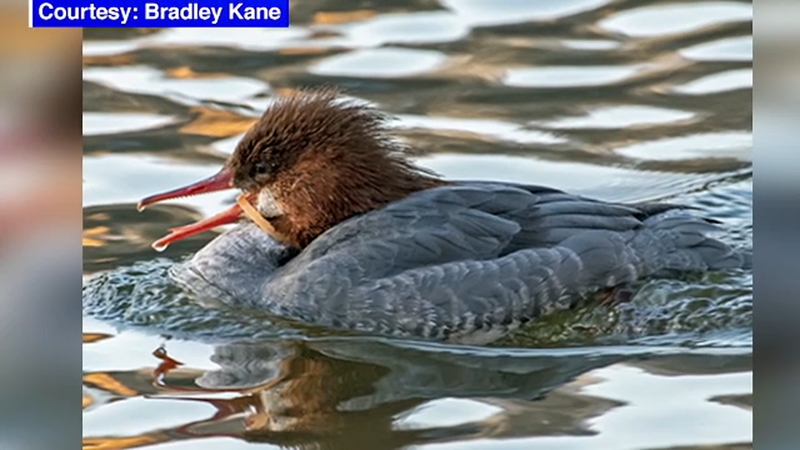 CENTRAL PARK -- The New York City Parks Department is working to save a rare duck spotted in Central Park gagging on a piece of plastic.

Bird watchers were excited to see the duck, known as the common merganser, but concerning photos quickly spread on social media.

Despite its name, the common merganser isn't common in Central Park or Manhattan.

Excitement over the rare bird quickly turned to worry.

One photographer captured a photo of the duck Saturday with a plastic ring jammed in its bill, preventing it from feeding.

I should be thrilled to see this Common Merganser hen, seen on the Lake in Central Park today, as it marks the 199th bird species I've seen in the park since I got back into birding in '16. However, it's tough to see it suffer due to our use of plastic. Rescue attempts ongoing. pic.twitter.com/hRTT9vzv6M

"We noticed right away that it had a plastic ring on its bill and going around its neck, so it was in distress, and that's when we started looking into how we can rescue this bird," said birder Davit Barrett.

The social media posts prompted park rangers to launch a rescue mission on and around Central Park Lake.

Teams have been out on the lake where the duck was found several times, but they have had no luck finding it.

"These are beautiful birds, and it is suffering," Barrett said. "It isn't going to come around for feeding and it's not going to be lured in to feed out of your hand, it's very leery of people."

Experts worry a happy ending may not be realistic at this point. The bird will be very tired by now, and rendered nearly lame by pollution, it will likely become food for prey.