Pilots who are part of the the Condor Squadron fly in formation over memorial services and community events.
KABC
By Amanda Palacios 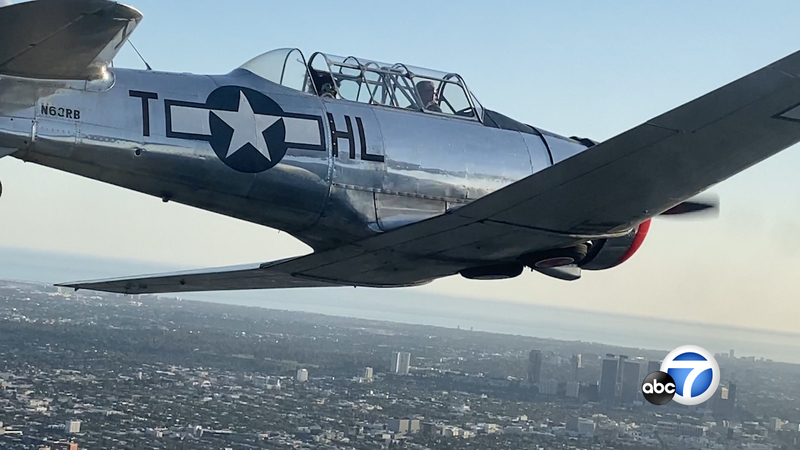 VAN NUYS, LOS ANGELES (KABC) -- These vintage propeller planes date all the way back to the 1940s. Fighter pilots trained in these North American AT-6 planes during World War II. Nearly 80 years later, they're still being flown by aviation pilots who are part of the nonprofit organization known as the Condor Squadron located in Van Nuys.

"The Condor Squadron was founded in 1962 by former World War II fighter pilots who wanted to come together and maintain the aviation history of the United States military," said Vice President Eric Zine. "We are now the third generation of volunteers that restore, maintain, and operate these very historic World War II planes."

"We fly on average, I would say once or twice a week to stay current, proficient. We probably average between two and three, maybe sometimes four memorial events a month," said Flight Operations Director Rob Sandberg.

This Memorial Day you'll have an opportunity to see the Condor Squadron pilots in action soaring over Southern California to honor our fallen military heroes.

"That's really what this organization is all about to me. Honoring the veterans and recognizing the sacrifices that they made for our country," said Maintenance Director Will Tinsley.

"We have probably seven targets that we will fly over. We'll fly for about two and a half hours starting in Santa Clarita. And then we'll go all the way to Santa Barbara and then as far east as El Monte," said President Chris Rushing.

You can see the Condor Squadron planes in the sky from 10 a.m. to 12:30 p.m. on Monday. For more information, go to condorsquadron.org.