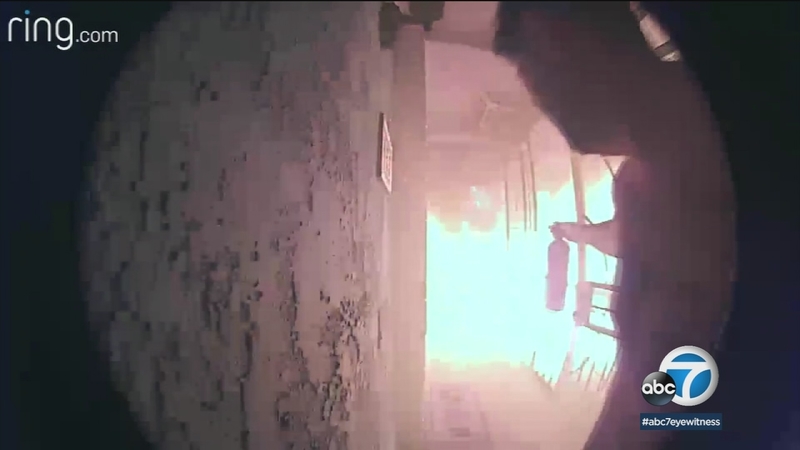 Corona couple claims video doorbell helped save them from fire

CORONA, Calif. (KABC) -- A Corona homeowner was awakened in the middle of the night to find his house on fire, and he says his smart doorbell is what alerted him.

Video shows the flames surrounding the front of Mike Hernandez's home. When he went to the door with a fire extinguisher, he quickly realized there was nothing he could do to stop the blaze.

Mike, his fiance Katy and his brother all escaped unharmed.

The terrifying scene was recorded by a home surveillance system featuring the Ring Video Doorbell with a motion detector. That detector was triggered by the fire.

Mike said he received several alerts on his phone app when the fire broke out.

"I finally opened up my eyes and looked to my right and outside my bedroom window I just saw what looked to be flames," Mike explained.

The fire broke out in trees next to the driveway of the home and spread quickly. It was driven by strong winds sweeping through the yard, destroying a neighbor's house.

"We took down our smoke detector because we just repainted the entire house, and so without the Ring system in place and me getting these alerts, I probably would not have woken up," Mike added.

Corona firefighters saved the couple's home, but it sustained a lot of damage. Mike and Katy just bought the house a month ago.

"It's terrifying, but we're going to move forward, and we're thankful that, you know, it wasn't worse," Katy said.