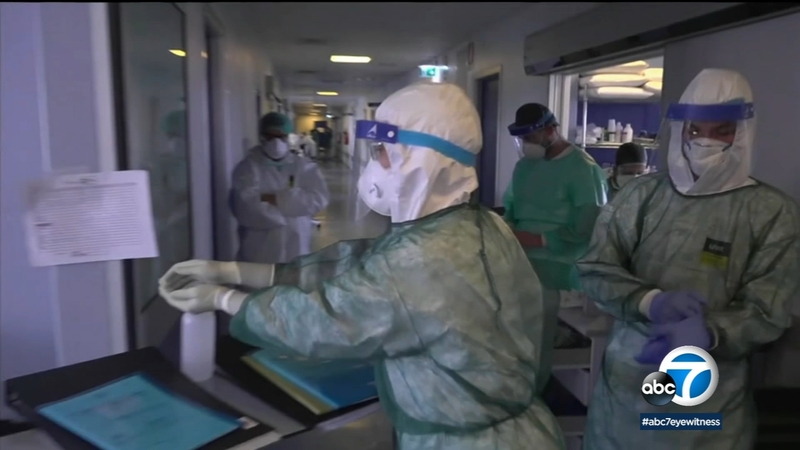 The gear includes everything from gloves, face shields, gowns, sanitizers and N95 masks, a respiratory protective device that is the best way to prevent a COVID-19 positive patient from transmitting the virus to the workers treating them.

"Not only is it a lack of supplies would harm us or hurt us in the ability to take care of patients, but it would endanger the staff as well, and if staff gets sick and they can't come in to take care of patients that makes it even doubly challenging," said Cliff Daniels, chief strategy officer for Methodist Hospital of Southern California.

Now, cities, states and hospitals across the United States are left vying for the same equipment, creating competition for those materials and driving up prices through bidding wars.

"I could write a book about how that process is unfolding," said California Gov. Gavin Newsom. "It's the wild, wild west out there in terms of procuring those masks, the shields, the glove sets."

John Cohen, an ABC News contributor and former Acting Undersecretary at U.S. Department of Homeland Security, said the bidding wars over personal protective equipment are not only costly and counterproductive, they're also putting patients and health care workers at risk.

"I just want to encourage folks, if you have a line on ventilators - it doesn't matter if they're brand new, maybe you have a few pieces lying around your house, I don't mean to be flippant, we'll take them," Newsom said.

Bidding wars over personal protective equipment have broken out among city, state and hospitals across the country amid a sharp increase in coronavirus cases.

Southern California school kids are pitching in. Students at Campbell Hall in Studio City are using 3D printers to make reusable masks. So are librarians at the Los Angeles Public Library.

"I've seen some of the most creative approaches to acquiring good, quality PPE that I've ever seen," said Dr. Nicholas Testa, chief medical officer for Dignity Health California. "We've had local downtown craftsmen build acrylic, what we call innovation boxes, which are boxes that we can put over a patient's head and then the physician can reach their hands in while intubating with them."

President Donald Trump continues to hear from governors, doctors and hospitals that are begging for the equipment.

Trump said in a tweet Thursday that some states and hospitals "have insatiable appetites & are never satisfied (politics?). Remember, we are a backup for them. The complainers should have been stocked up and ready long before this crisis hit."

Rear Adm. John Polowczyk, U.S. Navy director of Fleet Ordnance and Supply, is in charge of getting supplies to U.S. hospitals. He said Thursday that six plane-fulls have already arrived, and 28 will follow. But, the federal government won't be giving the supplies to doctors and hospitals, they're selling them on the open market.

"The states have to stock up. It's like one of those things, they waited. They didn't want to spend the money because they thought this would never happen," he said.

In Texas, a large purchase order for PPEs wasn't honored after someone else offered to pay more and created a "bidding war," Houston Mayor Sylvester Turner said.

Houston Fire Department Chief Samuel Peña said he received a shipment of supplies from Mexico and has looked as far as the Middle East to secure more equipment for first responders.

In New Jersey, Gov. Phil Murphy said his state is "desperate" for more PPE. Illinois Gov. JB Pritzker told CNN the fight for supplies is like the "Wild West." And on Monday, Pritzker said the federal government sent the wrong type of mask - they received surgical masks instead of N95s.

In Philadelphia, the Federal Emergency Management Agency only fulfilled 44% of the state's requested PPE, leaving them short more than 382,000 N95 respirators and still in need of more than half a million face and surgical masks, according to a report Thursday from the U.S. House Committee on Oversight and Reform.

North Carolina has received only a portion of the masks, gowns, gloves and face shields it requested from the federal government. Officials there are fighting back against scammers who are trying to take advantage of the need for PPE by "making offers and demanding up-front payment for something that looks sketchy and is probably not a real thing," said Wake County EMS Assistant Chief Jeff Hammerstein.

New York Gov. Andrew Cuomo, whose state has more than 92,000 confirmed cases, said states are willing to pay whatever it takes to get their hands on supplies and even though that continues to increase costs, it is not even considered price gouging since it is private market competition among bidders.

"You have 50 states competing to buy the same item. We all wind up bidding up each other and competing against each other," Cuomo said. "You now literally will have a company call you up and say, well, California just outbid you."

Newsom said governors across the U.S. are starting to form partnerships and consider connecting procurement teams to work together and ensure "none of us are being greedy at this moment and that we have the capacity to move things around."

"We want to help other states even as large as Illinois and Washington State, some of the largest states in our nation, to see if we can help procure not only a reduction in costs per unit, but also procure a mindset where we're not playing in the margins of a zero sum where it's us versus them," Newsom said.

There were more than 245,000 confirmed COVID-19 cases in the U.S. as of Friday morning, according to the John Hopkins University's Coronavirus Resource Center. In addition to protection for frontline workers, the equipment to keep critically ill patients alive is also at the center of the bidding war.

Cuomo called on the federal government - or even states themselves - to get organized and eliminate private market competition.

The federal government says it is providing some relief. The U.S. Department of Health and Human Services announced last month that it would purchase 500 million N95 respirators over the next 18 months for the Strategic National Stockpile.

RELATED: Coronavirus: How to cope with stress, anxiety during COVID-19 pandemic

Now, the government is relying on additional funding to "exhaust all means to identify and (obtain) medical and other supplies needed to combat the virus."

The Coronavirus Aid, Relief, and Economic Security Act, which was signed by Trump last week, allocates $27 billion "for the development of vaccines and other response efforts, including $16 billion to build up the SNS with critical supplies, including masks, respirators, and pharmaceutics," according to FEMA.

U.S. governors join Trump at least once a week for a conference call about the latest on the coronavirus pandemic and where current supply of personal protective equipment stands.
In a tweet Thursday morning, Trump pushed back on states' claims that the federal government isn't providing enough equipment, fast enough.

"Some have insatiable appetites & are never satisfied (politics?). Remember, we are a backup for them. The complainers should have been stocked up and ready long before this crisis hit. Other states are thrilled with the job we have done," he tweeted. "Sending many Ventilators today, with thousands being built. 51 large cargo planes coming in with medical supplies. Prefer sending directly to hospitals."

Even when FEMA shares materials from its stockpile, it is sometimes only enough to get cities through a few more days and at times has left cities discussing the possibility of shutting down testing sites due to lack of supplies.

Amid the shortage, the federal government is encouraging the reuse of PPE and creating guidelines for how to adequately clean and recycle the equipment, including some items that healthcare professionals have said are typically intended for one-time use.

Earlier this week, FEMA said 80 tons of PPE supplies were delivered to New York, New Jersey and Connecticut, which have become one of the U.S.' hotspots for cases. Supplies were also delivered this week to Chicago and FEMA says items will be distributed across the U.S. based on the greatest need, such as "areas experiencing the greatest increase in COVID-19 cases with the largest forecast capacity shortfalls."

But, cities say the materials aren't getting in the hands of healthcare workers quick enough.

Cohen said the pandemic is unlike any other natural disaster. It is taking over the entire U.S.; not just one localized region.

It's something FEMA is tasked and prepared to handle, he said, but the government was too slow to act, leaving critical need areas struggling to acquire equipment and establish hospital overflow areas.

"They were created to deal with situations like this and they're beginning to manage this disaster in the way that they prepared to do so. The only question I have is why did it take so long for the administration to activate FEMA at this level? This should've been done months ago," Cohen said. "We've lost time and when you lose time in a natural disaster or any type of public health crisis, people die."