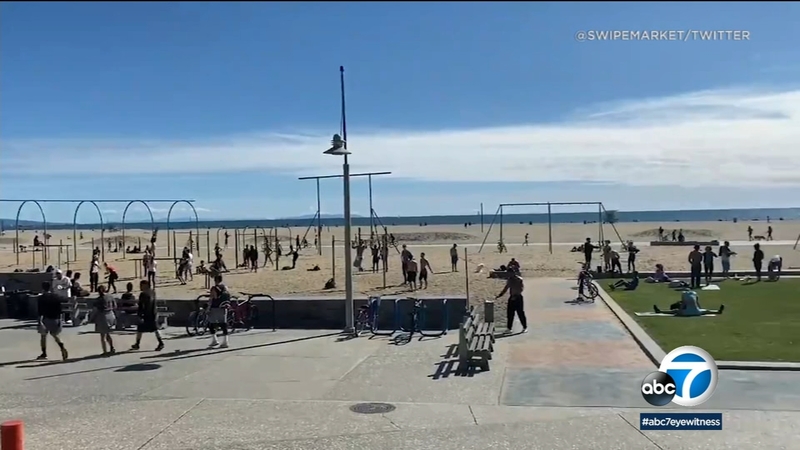 SoCal goes outside during 1st weekend of stay-at-home order

Though it seemed that the majority of Californians stayed home during the first weekend under an order that called for its 40 million residents to stay inside, some outdoor areas of the state were bustling.

Residents across Southern California were seen out and about, less than 48 hours after Gov. Gavin Newsom issued a sweeping stay-at-home order to help reduce the spread of COVID-19, shutting down all but essential businesses.

During a Saturday news conference, California Gov. Gavin Newsom scolded those who violated the policy.

"Be a good neighbor, be a good citizen. Those young people that are still out there on the beaches, thinking this is a party, time to grow up. Time to wake up. Time to recognize it's not just about the old folks, it's about your impact on their lives. Don't be selfish," he said.

Still, Newsom said, the majority of people were adhering to the order, though some areas of the state saw lot of public activity.

An AIR7 HD tour of Southern California shows beaches, freeways and mall parking lots that are nearly empty as the coronavirus shuts down most activities.

Many congregated at the beach in Santa Monica on Saturday, which is allowed under the statewide order, though questions surfaced whether those people were practicing social distancing and following the guidance from public health officials to avoid as much physical contact with others as possible.

It was a similar situation at Griffith Park, where many flocked for fresh air and a morning hike.

"We try to be mindful, but at the same time, I don't want to be obsessed with it so I think as long as you're careful, I think it's fine," said Fabien Darioli of Universal City.

In Illinois, where a similar order has been enacted, authorities had to break up parties that violated the mandate.