Garcetti says stay-at-home order is adjustable: 'Do not freak out'

Mayor Eric Garcetti's comments come as the county's public health director said the stay-at-home order will "with all certainty" be extended unless there is a "dramatic change to the virus and tools at hand."
KABC 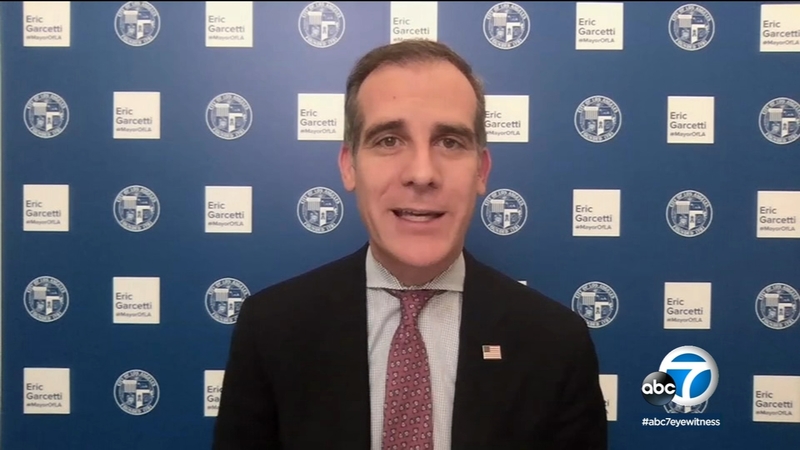 Garcetti says stay-at-home order is adjustable: 'Do not freak out'

LOS ANGELES (KABC) -- Los Angeles Mayor Eric Garcetti said on Tuesday that while county officials are recommending the stay-at-home order to be extended for the next three months, the order is also flexible.

"When our county health officer Dr. (Barbara) Ferrer merely said that an order would stay in place for at least three more months, that doesn't mean the order stays in place exactly as it is today," Garcetti said on CNN.

The mayor said the city can not fully reopen until a vaccine has been developed.

"It's just a reminder of how delicate and fragile this time is, but do not freak out when you hear a scientist say that it's still going to be here and we're still going to be living under health orders," Garcetti said about the extension.

Los Angeles County officials are recommending that the stay-at-home order be extended for the next three months as the region continues efforts to reduce the spread of the coronavirus.

The mayor talked about the extension during an interview on ABC's Good Morning America on Wednesday.


"I think we all have to recognize that we're not moving beyond COVID-19, we're learning to live with it," Garcetti said. "It's important not to overreact but it's important to take this serious because it's as dangerous today as it was the first day that it arrived in our cities and our country. So quite frankly, there's no so-called 'open state' or 'open country' that doesn't continue to have health orders telling us to cover our faces, physically distance and to tell people that you're safest working from and staying at home. That's all that the country health director was saying."

During an interview on ABC's Good Morning America on Wednesday, Los Angeles Mayor Eric Garcetti talked about the county's recommendation to extend the stay-at-home order for the next three months, saying the region is not exempt to having public health orders in effect for COVID-19.

Public Health Director Dr. Barbara Ferrer said the order will "with all certainty" be extended unless there is a "dramatic change to the virus and tools at hand."

Ferrer made the comments at a Board of Supervisors meeting Tuesday during a debate over how long the county's moratorium on evictions should remain in place.

"There's no radical changes in the next week coming but that doesn't mean, three weeks from now, six weeks from now, two months from now we won't continuously edit that order," Garcetti also said on CNN.

Garcetti said the county is testing 20,000 people each day. Meanwhile, COVID-19 cases and deaths continue to rise in the region.

Los Angeles has gradually begun a reopening of certain businesses and recreational areas, and on Wednesday, beaches reopen with restrictions.