Coronavirus update: Quarantine ordered for American flown from China who tried to leave Riverside military base 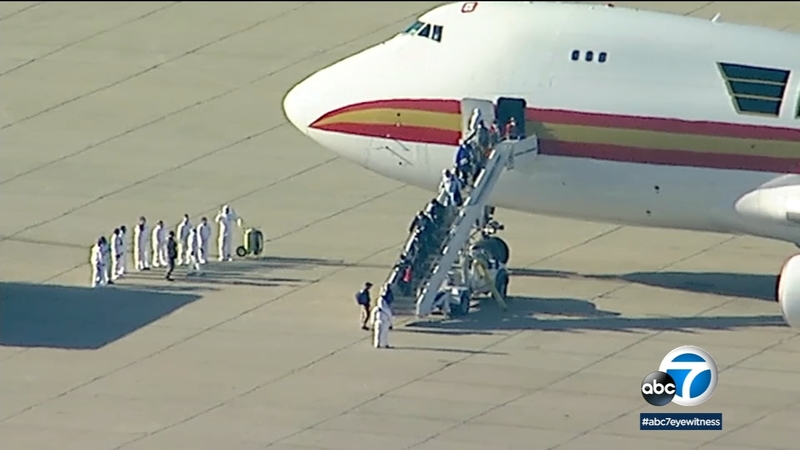 Coronavirus: Quarantine ordered for American flown to IE from China

RIVERSIDE, Calif. (KABC) -- A quarantine order was issued Thursday for one of the nearly 200 Americans who evacuated the Chinese city at the center of the coronavirus outbreak and arrived at March Air Reserve Base in Riverside after officials say the person tried to leave the base.

Riverside County public health officials issued the order, requiring the person who landed on a U.S. State Department-chartered airplane Thursday to stay for the duration of the incubation period or until otherwise cleared.

"This action was taken as a result of the unknown risk to the public should someone leave MARB early without undergoing a full health evaluation,'' officials said in a written statement.

All other passengers from the Wuhan, China, flight have also been ordered to remain at the base and continue to be evaluated. Officials say the person did not try to sneak away but just tried to leave before the 72-hour monitoring period was over. That person, who was not identified, will now stay on the base for the duration of a 14-day incubation period.

Patrick Stockstill and his family were also on the flight and are waiting until the 3-day health screening period is past so they can leave the base.

"When he first stepped on board, my jaw dropped. I've never seen a plane set up like that before. It was a wide open cargo plane but had passenger seats in it. Honestly, it felt like something out of a movie," Stockstill said.

The incident came as the World Health Organization declared the outbreak a global emergency after the number of cases spiked tenfold in a week.

Six people in the United States have been diagnosed with coronavirus, including one person each in Los Angeles and Orange counties.

The first U.S. case of person-to-person spread of the new virus from China was announced Thursday.

The individual is married to the Chicago woman who got sick from the virus after she returned from a trip to Wuhan, China, the epicenter of the outbreak. There have been cases reported of the infectious virus spreading to others in a household or workplace in China and elsewhere.

China first informed WHO about cases of the new virus in late December. To date, China has reported more than 7,800 cases including 170 deaths. Eighteen other countries have since reported cases, as scientists race to understand how exactly the virus is spreading and how severe it is.

The U.S. State Department said another flight carrying American citizens out of Wuhan is being scheduled but further details were not available.