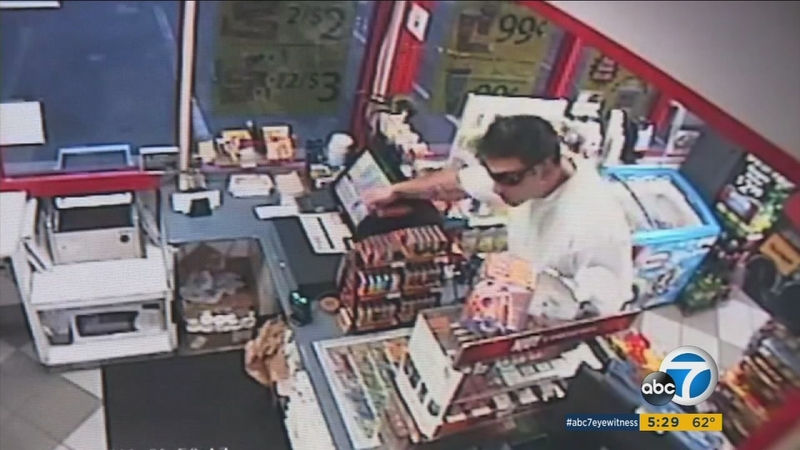 SANTA ANA, Calif. (KABC) -- A surveillance video from inside a 76 gas station in Santa Ana showed a man demanding money from a clerk. When she failed to respond, the man climbed over the counter and chased her out of the store.

"He had a small knife. He displayed it to her as he's going over the counter. Obviously, you can see her reaction was to flee," Cpl. Anthony Bertagna of the Santa Ana Police Department said.

The clerk ran out the back door screaming as the man returned to the counter. After struggling to open the cash tray, he decided to yank the entire register out.

Santa Ana police said that they were relieved that the woman was not hurt.

"Scary for us is the way that he, you know, pursued the victim, often these things become more and more violent," Bertagna said.

The clerk told Eyewitness News that she was terrified and could not move. When he jumped over the counter, she ran as fast as she could. After the encounter, the video showed the man walking to his car and leaving.

"He didn't park his vehicle away from the location, he nonchalantly walks to the car, it wasn't a run," Bertagna stated.

According to officers, the man is driving a charcoal gray Kia Forte with a California license plate. They are asking for the public's help in finding the man before he can strike again.

"Please help us identify this individual before he hurts somebody," Bertagna said.