LA County health director: Pandemic in home stretch, but not over 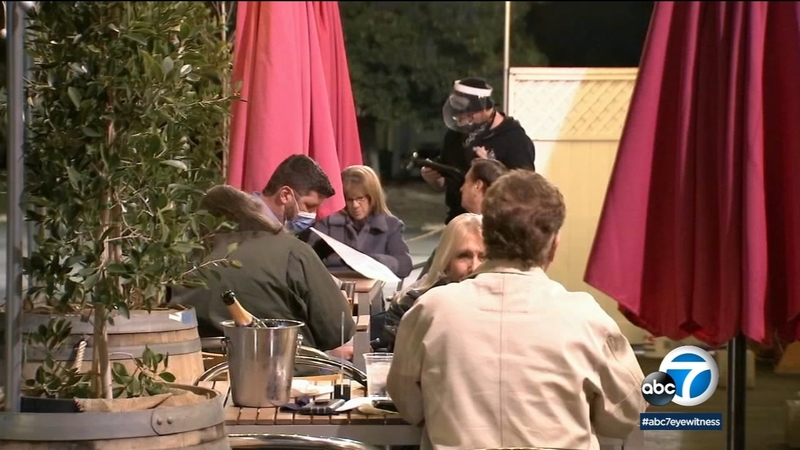 LA County health director: Pandemic in home stretch, but not over

LOS ANGELES (KABC) -- With more COVID-19 restrictions likely to be lifted in coming weeks, Los Angeles County's public health director has warned that while an end to the pandemic is in sight, it's not over yet.

"Our biggest worry is, of course, that people will relax too much, decide not to wear their face mask, decide not to keep their distance, decide to go back to having big parties,'' Barbara Ferrer said Wednesday during a virtual briefing. "We're just not there yet. None of that would be safe at this point, and all of it can cause spread.''

Her warning came amid continuing downward trends in COVID-19 cases and hospitalizations, but with daily deaths regularly topping 100 and more variants of the virus appearing that could more quickly spread through a community still struggling to get fully vaccinated.

Ferrer said the county has now confirmed the first case of a COVID variant first discovered in Brazil, and the number of cases of a variant that originated in the United Kingdom has shot up to 27, a 50% jump from the 18 cases known as of last week. And a California variant is becoming increasingly dominant, with county officials detecting the mutation in 31 of 55 specimens that were specifically tested for it.

Los Angeles County's declining COVID-19 numbers could mean a shift to the less-restrictive red tier in a week or two, officials say.

"We still have a lot of community transmission,'' Ferrer said. "We still have variants that are dominating that are thought to be more infectious, that's the California variant, and an increased probability that we have more of the UK variant circulating as well. So our work is not done.''

She said news that vaccine supplies are expected to vastly increase in the coming months -- beginning next week with the anticipated arrival of the first doses of the single-dose Johnson & Johnson vaccine -- means an end is in sight. But people can't abandon all infection-control measures before reaching the finish line.

"That means that we don't have that much further to go, and it would just be horrible if in the few months that are left we go through another surge,'' Ferrer said. "Our county frankly can't afford that in multiple ways. We don't want to do the see-sawing on opening and closing again.''

Meanwhile, in a major policy shift, state officials on Wednesday night said they will now devote 40% of available vaccines to people in disadvantaged areas. In conjunction with that move, the state adjusted the metrics it uses to advance counties through the tiers of its economic reopening blueprint, taking into account the rate of vaccinations in hard-hit communities to allow more businesses to reopen sooner when advancements are made.

Los Angeles County is on track to exit the restrictive purple tier of the state's four-level economic-reopening road map by late March. If it advances to the less-restrictive red tier, more businesses could be cleared to open, including indoor dining, movie theaters and fitness centers, all at limited capacity.

Figures released by the state Tuesday put the county's adjusted average daily rate of new COVID-19 infections at 7.2 per 100,000 residents. If that number falls to 7 per 100,000 residents and stays at that level for two weeks, the county will be able to move out of the restrictive purple tier of the state's "Blueprint for a Safer Economy,'' and into the red tier. The county already meets the other two required metrics -- with an average testing-positivity rate of just 3.5% and a "health equity quartile'' of 5.1% -- to advance to the red tier.

It was not immediately clear how the state's change in policy and addition of vaccine distribution into the tier formula will affect Los Angeles County's status.

Ferrer noted that in addition to allowing more businesses to open, moving to the red tier would also allow in-person instruction to resume for students in grades 7-12. The county already meets the requirements for in-person classes for pre-kindergarten through sixth grade.

She got emotional as she read comments from recent discussions with school children about the difficulties the pandemic has caused on their families and their ability to continue learning.

"This pandemic has been extraordinarily difficult for so many, and it's been powerful for us all to hear the voices of young people who have had the courage to tell us in their own words how they're feeling,'' Ferrer said, her voice breaking. "This is why we really do need to recommit ourselves to use every single tool we have to reduce transmission, to vaccinate everybody who's eligible and get to a place where all of our children can get back to school with the safety that's required in their school community.

"Our children have been through something that none of us experienced as children, and we owe them all our support and our effort so that they can be as safe as possible as we move toward a more healthy future.''

Ferrer announced another 116 COVID-19 deaths on Wednesday, although 15 of those fatalities were actually reported Tuesday afternoon by health officials in Long Beach and Pasadena. Long Beach added six more deaths Wednesday afternoon, and Pasadena reported one. The new deaths lifted the countywide death toll from throughout the pandemic to 21,676.

Distribution of vaccine is accelerating nationwide as California sees a drop in cases and school districts plan for reopening.

According to state figures -- which are typically a day ahead of county numbers -- there were 1,401 COVID-19 patients in L.A. County hospitals as of Wednesday, well below the peak of more than 8,000 patients in early January. There were 450 people being treated in intensive care units for COVID.

Ferrer said the dwindling hospitalization numbers are a positive sign, but they're still elevated, noting that the daily average number of people admitted due to COVID in November was 800. And she said she has still been regularly reporting more than 100 daily deaths, when the daily number in early November was about 14.