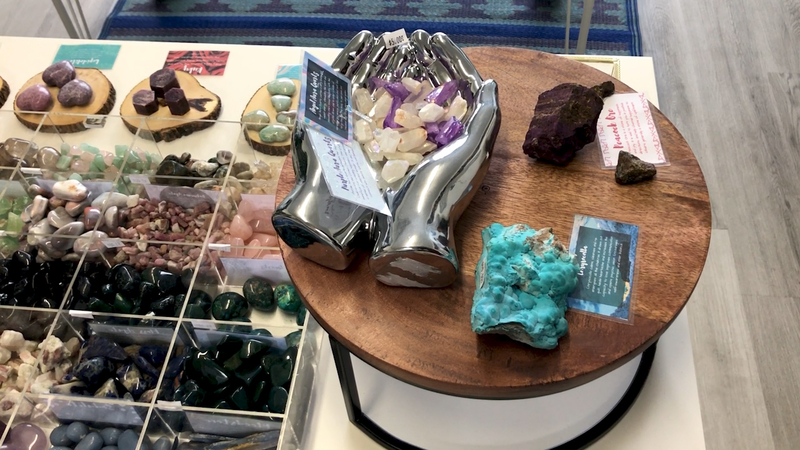 Crystals are all the rage lately - celebrity crystal fans include Naomi Campbell, Victoria Beckham and Jenna Dewan. Angels on Earth is a new crystal shop in Inglewood. Owner Jessica Osnaya said the idea came from her mother who suffered a stroke back in 2015.

"I really started to dive into spirituality and crystals and self-healing and self-love and honestly I say that's when my journey with crystals began," Jessica said.

"I suffered a stroke, which left me paralyzed on the right side, but through it all I was still able to see the positive of life," Marian Osnaya said.

Marian, Jessica's mother, suffered numerous health ailments. Marian had kidney failure, was on dialysis for two months and was in a coma for a week. It was during this time, Marian found comfort in crystal healing.

"If you were to see me 10 months ago, I was basically being picked up for about two months on a gurney," Marian said. "I truly believe I'm a walking miracle."

The pink stone is rose quartz and it's all about love. Jasper is known as the supreme nurturer. Amethyst is said to have protective, healing and purifying powers. While there aren't scientific studies to support their effectiveness, there are studies that support placebo effects.

"Whether you believe the vibrations of the crystals or not, as long as that crystal is like a daily reminder of what it signifies, it's still changing your mind," Jessica said.

Jasmine Butler considers herself a 'crystal newbie', but she agrees that crystals can be helpful with establishing a positive mindset.

"I feel like going through the world, it's very easy to look at the negative side of things throughout life,"Butler said. "So, having something to look at every single day just to center myself and guide my focus has been really helpful."

"There were many therapist doctors, friends, family, people that were there for me helping me get through hard times," Marian said. "That's why I came up with Angels on Earth, because it's true, there are angels here."